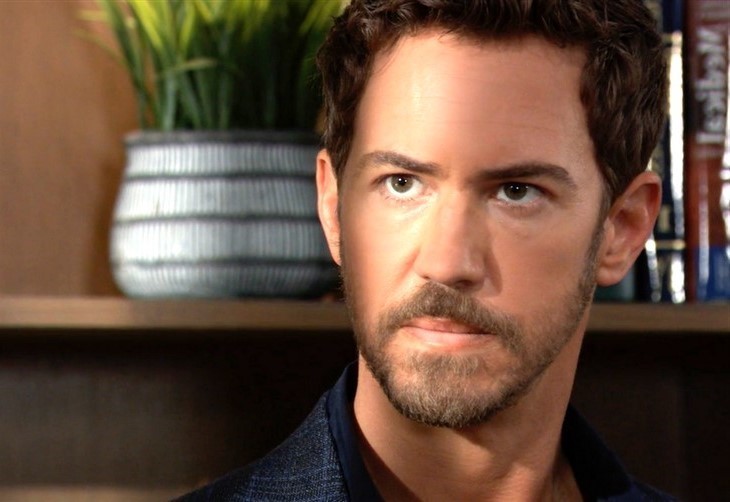 General Hospital (GH) spoilers for Friday, December 3, 2021, reveal Peter back in Port Charles, twirling his mustache, hissing, and laughing maniacally like the cartoon villain he is as he plans his delusional and deranged next steps.

Since nobody can seem to kill Peter August (Wes Ramsey) and the WSB sent him back to Port Charles rather than The Hague, Maxie Jones (Kirsten Storms) might be right about never being free of Peter. But that’s also why she’s right about telling Valentin Cassadine (James Patrick Stuart) the truth about Bailey so he can protect her. Peter is in General Hospital right now and it looks like he may plot his escape.

But Maxie is too busy catching up with Drew Cain (Cameron Mathison) to realize what Peter might be up to. The two catch up and we have to wonder if this is a chem test. Hmmm….

Meanwhile, Valentin wants to see Bailey and is heartbroken when Brook Lynn Quartermaine (Amanda Setton) won’t allow it. At least he gets to cry on Anna Devane’s (Finola Hughes) shoulder. We still see Valentin becoming pettier and seeking more revenge before he finally learns the truth about Bailey.

Carly (Laura Wright) is hurt and Carly is angry and that could make her more dangerous than Peter. When Carly and Sonny Corinthos (Maurice Benard) visit the hospital, they run into Nina Reeves (Cynthia Watros) and Carly feels uneasy about the whole thing because she sees something between Nina and Sonny.

Elsewhere, Sasha Gilmore (Sofia Mattsson) and Brando Corbin (Johnny Wactor) get news about their baby and later, Sonny gives Brando advice on how to be a father. If anyone in Port Charles should know, it would be Sonny considering how many characters he has fathered. If Sonny is giving this advice, does this mean little Liam Mike Corbin will be ok?

Britt Westbourne (Kelly Thiebaud) couldn’t handle the idea of going to Austin Holt’s (Roger Howarth) place for some football on Thanksgiving, but the pair meet up again on Friday and Britt makes an assumption about Austin. Is she right? Stay tuned to General Hospital weekdays to see how these stories play out.