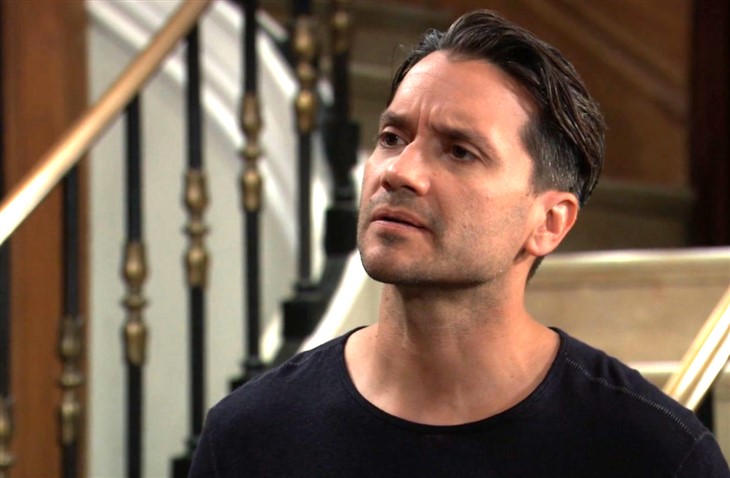 General Hospital (GH) spoilers for Friday, August 6, 2021, reveal Dante is finally thinking about Lulu and getting some news as he contemplates moving on with his life.

Dante (Dominic Zamprogna) has his life back together after a harrowing time working for the WSB. He didn’t exactly complete the mission and kill Peter August (Wes Ramsey) dead and totally dead, but he is a cop again and developing feelings for someone new.

On Friday, Dante and Laura (Genie Francis) meet up at the Metro Court where Laura (Emme Rylan) has an update on Lulu and it’s not good. Her condition is not improving and it looks like she will be lingering in a coma for a long time to come. We all know miracles can happen on soaps and often do, but for now, it doesn’t look like Lulu is returning to Port Charles any time soon.

The Port Charles amnesia continues as Sam (Kelly Monaco) and Nikolas (Marcus Coloma) visit Alexis (Nancy Lee Grahn). Nikolas still fears someone will figure he had Hayden (Rebecca Budig) shot and Sam forgets that she already knows. But it doesn’t look like Nikolas accompanies Sam so he can see Alexis. He is much more interested in Ryan Chamberlain (Jon Lindstrom).

At Kelly’s, Finn (Michael Easton) and Elizabeth (Rebecca Herbst) share a meal with Violet (Jophielle Love) and talk of Hayden comes up. Liz has to decide if she’s crazy or not because she does seem to remember knowing Nik shot Hayden, but he says he was lying. She still must know so talk of Hayden’s mom comes up and lo and behold we actually see her. Will Violet have a reunion with her grandmother?

Meanwhile, Shawn (Sean Blakemore) spends more time at the Metro Court pool, happy to not be in prison. He still wants to know who really had Hayden shot, but is also intrigued when Ava (Maura West) offers him a job.

Anna (Finola Hughes) is still determined to learn what happened to Peter’s body — or just Peter if he’s still alive. When she meets up with Liesl (Kathleen Gati) that’s all Liesl wants to talk about as she warns Anna that they must be on their guard at all times. Stay tuned to General Hospital weekdays to see if Peter ever turns up.