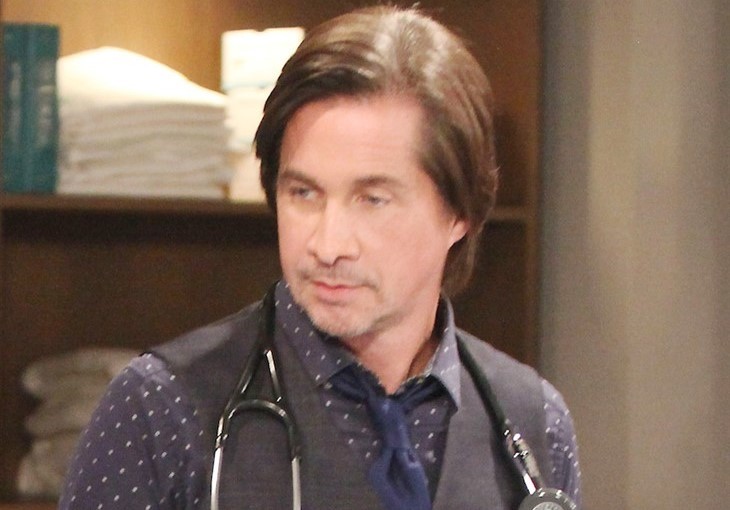 General Hospital (GH) spoilers tease that Peter August (Wes Ramsey) seemed to have vanished into thin air while attempting to escape General Hospital. Viewers will remember that Peter tried to reunite with Maxie Jones (Kirsten Storms) after she gave birth to their baby. But Maxie lied that the nurse Peter hired to facilitate the childbirth stole the baby. It was only then that Maxie was finally able to unleash months of anger on the man she once thought she would be spending her life with. Realizing he wasn’t going to be able to take Maxie with him, Peter fled to the roof of the hospital where a helicopter was supposed to pick him up.

Following Peter to the roof. Dr. Hamilton Finn (Michael Easton) wasn’t about to let Peter get away without handing over the cure to his brother Harrison Chase’s (Josh Swickard) poisoning. Peter had poisoned Chase to keep Anna Devane (Finola Hughes) from pursuing her investigation into Peter’s crimes. Peter had been giving out just enough of the cure as needed to keep Chase alive, but it didn’t tale long after each dose until Chase was at death’s door once more. When Peter refused to help. An enraged Finn threw Peter down the staircase, where Nurse Elizabeth Webber (Rebecca Herbst) found him and pronounced Peter dead.

GH Spoilers – Dr. Hamilton Finn wanted To Confess But Then No One Would Be Able To Save His Brother!

Finn’s first instinct was to do right thing and confess to the aurhotities. But he realized if he were arrested, there wouldn’t be anyone who would have been able to find a cure for Chase. But they couldn’t just leave Peter’s body in the stairwell. That’s when Elizabeth remembered that Helena Cassadine (Constance Towers) has installed a sub-basement in General Hospital that was accessible from the roof. Finn and Liz moved Peter’s body to Helena’s lab, and placed him in a freezer to prevent decomposition. But weeks have passed and Finn and Elizabeth couldn’t agree what they should do next. While Liz wanted to call Jason Morgan (Steve Burton) for help, Finn didn’t want anyone else to be involved. But just at the moment, Jason showed up and listened from the shadows.

Anna has finally realized that Peter didn’t escape from the hospital like she had though. He must have met with foul play and all signs point to Finn! Even as Anna is confronting her ex, Jason stops Liz and wants to know exactly what happened to Peter. Jason will move quickly once Elizabeth fills him in. So by the time Finn can take Anna to where Peter’s body was, it will likely be gone!

Should Finn have told Anna what happened to Peter weeks ago? Should he have turned himself into authorities? And who will get to Peter’s body first, Jason or Anna? If there is no body there is no crime in Port Charles, so stay tuned to General Hospital airing weekdays on ABC. And don’t forget to check back right here regularly for all your General Hospital news, information and spoilers!