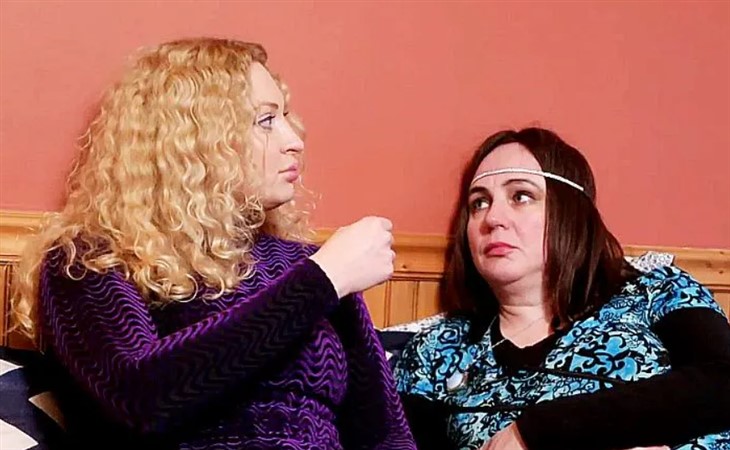 90 Day Fiance Spoilers suggest that Juliana may be sabotaging Natalie Mordovtseva’s relationship with Mike Youngquist. Does Juliana want Natalie for herself instead?

90 Days’ Natalie and Mike have always had problems within their marriage. However, it seems that Natalie’s friend Juliana is just as bad as Trish Youngquist when it comes to adding to them. Fans know that Mike’s mother doesn’t want them together. However, recent actions suggest that Juliana wants Natalie all to herself. Juliana keeps encouraging Natalie to leave Mike. The way Juliana talks to Natalie and touches her suggests that something more is going on as well. Does Juliana want Natalie to herself? Does Natalie not see what is going on or does Natalie feel the same? What has fans questioning the relationship between the two women?

While the 90 Days stars drank tea and talked, Juliana was complimenting Natalie on how feminine she is and how soft and beautiful she is instead of trying to help with her relationship problems. Juliana’s words and actions both come across as a come-on instead of a compliment. Fans believe something is going on between the two women besides friendship. After all, Mike’s first wife left him for a woman as well. Every time Natalie and Mike get into an argument, she makes an excuse to go to Juliana’s. Natalie has does this so many times that even Mike’s mother has commented on this fact. Juliana may be trying to be supportive, however, the way she touches Natalie says so much more.

No matter what feelings 90 Days Julianna has feelings for Natalie, Natalie is appearing on 90 Day The Single Life implying she isn’t with Juliana or Mike. Juliana was thrilled when Natalie agreed to move in with her but fans believe Natalie is using her for a place to stay. Did Natalie lead Juliana on until she found a new man? Have Natalie and Mike divorced since last week’s reports that no papers had been filed? How does Julianna feel about this decision to join the new show? Perhaps Julianna hopes to be Natalie’s love interest herself.

Julianna’s words and actions seem to give away exactly how she feels about Natalie. However, Natalie is not so open about her feelings. Will we see more of Natalie and Julianne’s interactions? Will Natalie move on when she realizes Julianna’s true feelings for her?