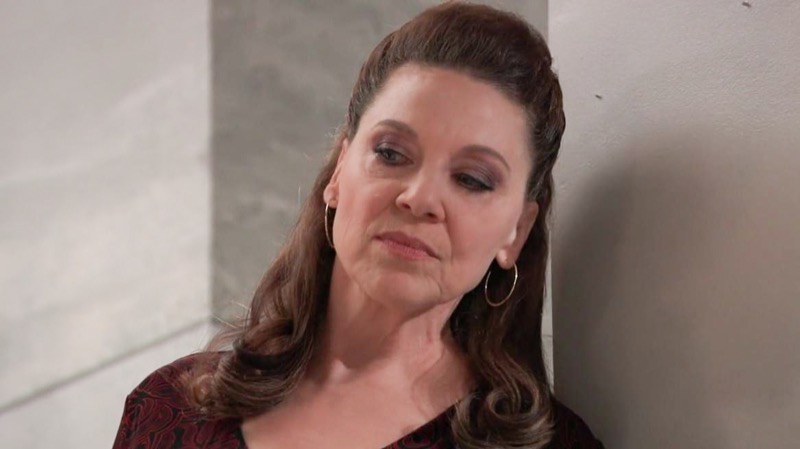 General Hospital (GH) spoilers for Friday, August 27, 2021, reveal Nina begging her Aunt Liesl for help because she has a Peter August-sized problem on the Pennsylvania side of the river.

Nina Reeves (Cynthia Watros) has a job for her aunt and we are sure she will accept it. Few people enjoy torturing Peter (Wes Ramsey) as much as Liesl (Kathleen Gati) and she does it so well, too. Oh, those memories of the Summer of 2018 when Liesl tied Peter to a bed and callously ate a cupcake right in front of him as he drooled and cried. Torturing Peter is what good General Hospital is all about and Liesl is here for it.

What will Liesl do to Peter once she makes it to Nixon Falls? We’re sure he will run as fast as possible when he gets there, but all she has to do is call her boyfriend, Scott (Kin Shriner), who surely wants revenge on Peter for killing his son. Bring it on, Dr. Obrecht!

Meanwhile, Smike doesn’t like Peter at all and his Sonny (Maurice Benard) side comes right out when he tells Peter to get the heck out of town.

Back At The Metro Court

Over there on yonder in Port Charles, Maxie (Kirsten Storms) is throwing herself into wedding planning while Austin (Roger Howarth) watches with confusion. That just confuses Scott as he needs to know why this man is throwing such an interest in Maxie.

By the bar, Carly (Laura Wright) is ruminating over her life and it hits her that she might actually have feelings for Jason (Steve Burton) and maybe this marriage will be more convenient than she realizes. She’s later thrown off guard when Jax (Ingo Rademacher) informs her that Joss (Eden McCoy) is not going to her wedding. Elsewhere, Jason is also issuing threats to the mob….

Nikolas (Marcus Coloma) thinks Ava (Maura West) will return to him once the “real” stalker is found, but she seems to tell him otherwise. Spoilers say he is heartbroken. Does she decide that his stunt with Spencer (Nicholas Chavez) was just too much?

As for Spencer, he pays a visit to Aunt Alexis (Nancy Lee Grahn). Will he also pay a visit to Ryan Chamberlain (Jon Lindstrom) while he is there? Stay tuned to General Hospital weekdays to see how this story plays out.