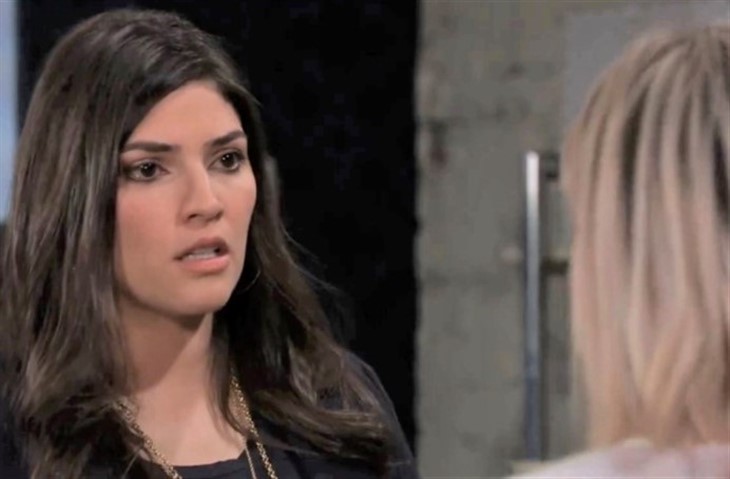 General Hospital viewers will remember that Brook Lynn and Maxie Jones (Kirsten Storms) made a deal. Brook Lynn needed a baby to fulfill her fake pregnancy while Maxie needed a safe place for baby Louise when she was born. Valentin Cassadine (James Patrick Stuart) had agreed to give Brook Lynn’s ELQ shares back only after their “baby” was born. That threw a monkey wrench into Brook Lynn’s plot, and then she had to find a baby! Olivia Quartermaine (Lisa LoCicero) had overheard Maxie talking to Nathan West’s (Ryan Paevey) grave about keeping her baby safe and not letting Peter August (Wes Ramsey) the baby’s father near her.

GH spoilers show Olivia had told Brook Lynn what she had overheard, in an effort to get her to put her baby ahead of business and not use it for a bargaining chip. Brook Lynn had been at Maxie’s apartment trying to convince her to let her have Louise when she is born when Peter showed up. After a time of placating Peter in front of Brook Lynn, he finally left and Maxie realized that Brook Lynn had a good plan.

General Hospital viewers know there would be no way Valentin would let Peter near a baby he thought was his either, although there will undoubtedly be some mess to clean up afterward in order for Maxie to reclaim Louise from Brook Lynn, especially if Valentin is involved! But Brook Lynn and Maxie would have to figure that part out later!

GH Spoilers – Dr. Britt Westbourne Is Part Of Maxie Jones’ Deal But She Has Another Deal To Fulfill

General Hospital viewers will remember that Dr. Britt Westbourne (Kelly Thiebaud) is Maxie’s obstetrician, and so she would be part of Maxie’s deal and would have to be let in the loop about Maxie and Brook Lynn’s deal in order for the deal to work. When she hears the whole thing she may well have agreed to do what is necessary for Peter to think Louise died and for Valentin to think that Louise is his baby with Brook Lynn!

But, as General Hospital viewers will also remember, Britt has another deal she has to fulfill – with Carly Corinthos (Laura Wright) to get Jason Morgan (Steve Burton) safely out of General Hospital! Britt is already under the very uncomfortable scrutiny of Cyrus Renault, (Jeff Kober) and told Jason and Carly in a recent episode of General Hospital that she thought Cyrus was on to them!

Britt is the only doctor in General Hospital who would agree to Maxie and Brook Lynn’s plan, except possibly Britt’s mother, Liesl Obrecht (Kathleen Gati) – but she doesn’t have privileges to practice at General Hospital!

According to GH spoilers, Cyrus has already locked Britt out of certain portions of the General Hospital computer system, so Liesl would not be able to go in under Britt’s credentials to fake any paperwork! This puts Brook Lynn’s plans and her deal with Maxie in jeopardy, because if Britt is on the run with Jason, they don’t have anyone else to go into the hospital computer system and fake the paperwork about the birth! Brook Lynn has to come up with something before she has to tell Maxie the deal is off!

Days Of Our Lives (DOOL) Spoilers: Belle Realizes Jan Framed Her, Can She Prove It?