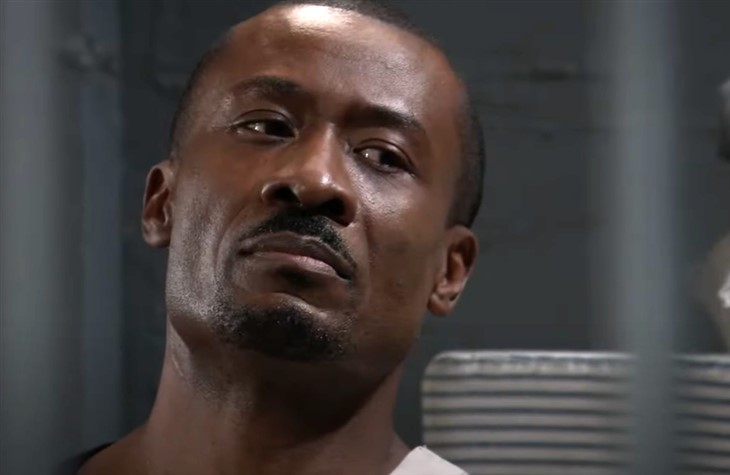 General Hospital (GH) Spoilers suggest that Alexis Davis (Nancy Lee Grahn) will be instrumental in getting Shawn Butler (Sean Blakemore) his freedom from Pentonville. After all, Shawn pled guilty to a crime that he didn’t actually commit. Unfortunately, because of his plea, Shawn is still in custody. Can Alexis clear his name?

General Hospital’s Shawn went to the garage that day to eliminate Jake Doe (ex-Billy Miller). However, Jordan Ashford (Briana Nicole Henry) hit Shawn’s arm causing him to miss his mark. Instead of allowing an investigation that could have led to Sonny Corinthos’ (Maurice Benard) being arrested for ordering the hit. However, no one realized there was a second gunman who shot Hayden Barnes (Rebecca Budig). A gunman hired by Nikolas Cassadine (Marcus Coloma) wanted to keep Hayden quiet.

General Hospital’s Alexis has been a mob lawyer as well as a district attorney. Alexis represented Sonny for years. Alexis knew full well what Sonny did for a living and still supported him. Alexis also dated Shawn after he arrived in Port Charles. Shawn was Sonny’s right-hand man after Jason Morgan (Steve Burton) disappeared. Shawn worked for Sonny until his arrest for attempted murder. Now, Alexis is in prison over a confession of her own. Alexis has a much lighter sentence than what Shawn has already served. Can Alexis use her experience from both offices to get Shawn released from prison?

General Hospital’s Alexis may be eager to help Shawn. Unfortunately, if Alexis does too much digging she is liable to find out that Nik is the one responsible for Hayden’s shooting instead. Alexis has no idea that some residents in Port Charles know what Nik did. Hayden’s sister Liz Baldwin (Rebecca Herbst) knew about the hitman hired by Nik.

Nik’s mother Laura Collins (Genie Frances) knew there was more to Nik’s story than most people know. However, Nik is not likely to admit to his aunt that he tried to have someone killed, especially someone he ended up married to. However, the police should still have evidence. The bullet fragment from the shooting should still be in the police files. Shawn’s gun should have been seized as well. Could a simple ballistics test clear Shawn’s name? Will Alexis have to go against Nik to help Shawn?

Alexis may not realize that helping Shawn will pit her against her family, especially the one person trying to protect her. Will Alexis expose Nik or can she clear Shawn’s name without involving Nik at all?