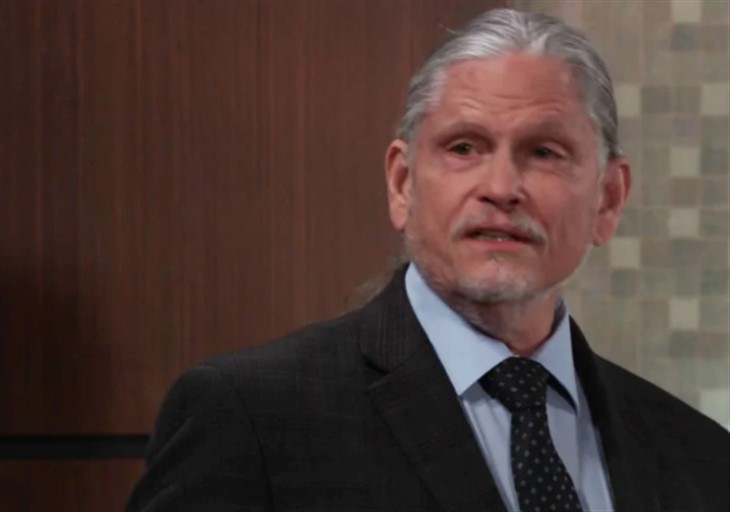 General Hospital (GH) spoilers tease that the one thing that Cyrus Renault (Jeff Kober) wanted to avoid no matter what the cost was going back to prison. But thanks to his capture and arrest, it looks like that’s exactly where he’s going. But although the drug lord has made several enemies in Port Charles, there are three women, in particular, Cyrus will vow to destroy. He got out of prison once using threats and intimidation against Police Commissioner Jordan Ashford (Brianna Nicole Henry) so there is every reason that eventually he will be free once again. Besides, he still has men loyal to him to could carry out any instruction at any time.

Cyrus spent almost every spare moment since he arrived in Port Charles trying to get close to Mayor Laura Collins (Genie Francis). At first, Laura had no idea why Cyrus had taken such an interest in her, but as it turns out, Cyrus was actually Laura’s half-brother. But Laura had no interest in forming any kind of familial bond with Cyrus and finally made it clear during a family dinner held by Ava Jerome (Maura West). Laura was there simply to distract Cyrus while Jason Morgan (Steve Burton) escaped Police Custody. Laura played nice as long as she could, but Cyrus finally wore her down and she made it crystal clear that she holds Cyrus responsible for her daughter’s injuries from the explosion at the Floating Rib. She would never accept him as a member of her family. Now it seems Laura will become his number one enemy, and he will most certainly plot to kill her at the right time.

Cyrus made a huge mistake underestimating Carly Corinthos (Laura Wright). When Sonny Corinthos seemingly died, Carly eventually took control of Sonny’s organization when Jason was unable to. Carly proved formidable almost immediately by kidnapping Cyrus’s mother and keeping her under nurses’ care in order to keep Cyrus from killing Jason or anyone else close to Carly. Cyrus’ biggest concern was Jason, so he paid Gladys Corbin (Bonnie Burroughs) to say she saw Jason dispose of the murder weapon used to kill Franco Baldwin (Roger Howarth), when actually it was Peter August (Wes Ramsey) she saw. Eventually getting Gladys to change her official story. Cyrus was finally a wanted man. Cyrus was miserable inside prison, so Carly will be his next target for setting in motion his eventual arrest and incarceration.

Cyrus kidnapped TJ Ashford (Tajh Bellow) and ordered Police Commissioner Jordan Ashford (Brianna Nicole Henry) Cyrus’ methods are well known in Port Charles. He will force people to do exactly what he wants by taking their loved ones away. If Jordan has been unable to find any way to get Cyrus out of jail, he may have killed TJ Ashford (Tajh Bellow) as promised until Jordan found a way to get Cyrus out of jail. She was successful, but anyone in her family could now be in danger if she tried something to actively pursue an arrest, Cyrus could and would take TJ again. But secretly, Jordan never stopped looking for ways to put Cyrus back in prison. During the recent hostage situation, Jordan eventually stormed the location and shot Cyrus. He suffered minimal injuries, but Jordan was finally able to make an arrest.

Have we seen the last of Cyrus, at least for the time being? Should Laura worry that Cyrus will have her killed from prison? Are Carly and her family still at risk from Cyrus’ men or is there peace for the time being? Will Cyrus finally get the last laugh on Jordan by killing her? Could Cyrus possibly reform while in prison? Criminals love to get the last work in Port Charles so stay tuned to General Hospital airing weekdays on ABC. And don’t forget to check back right here regularly for all your General Hospital news, information, and spoilers!