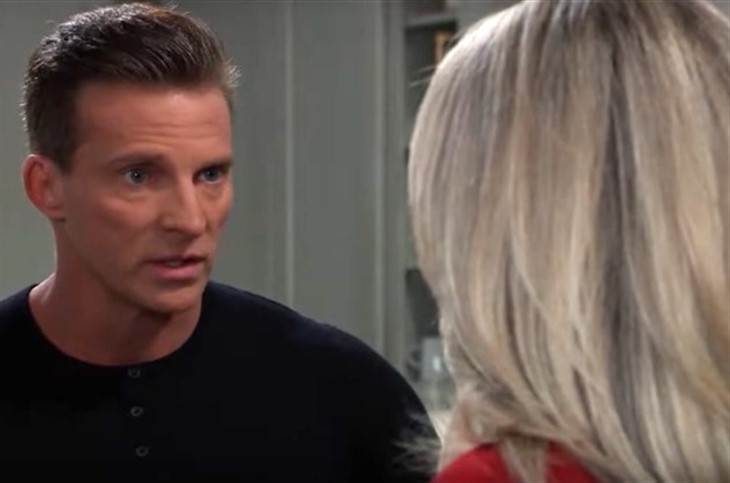 General Hospital (GH) spoilers tease that more than one person can’t be at the head of the Corinthos organization at the same time, and unless the position is taken by a show of force, it should remain with the current leader, Carly Corinthos (Laura Wright). The only way to successfully transfer power to Jason Morgan (Steve Burton), would be for Jason to force Carly out by force. The five families are expecting for Jason to take over now that he is free of the false charge of the attempted murder of Franco Baldwin (Roger Howarth). But of course, Jason won’t forcefully push Carly out even though that’s what they both want. So it looks like for the time being, Carly will need to remain as the head of the organization.

Jason may not be quite as upset about the situation as Carly is. He’s certainly prepared and capable of running the Corinthos Organization going forward, but his time on the run may have added a new wrinkle to the situation. As viewers know, Jason and Dr. Britt Westbourne (Kelly Thiebaud) had many conversations about his choice of career. Jason admitted that he wasn’t proud of his specific talents as a hitman. With Sonny Corinthos (Maurice Bernard) presumed dead, perhaps Jason isn’t quite as excited about remaining in the mob life as he has been in the past. And if Carly is forced to remain in power for now, Jason may have a couple options.

Jason and Sam McCall (Kelly Monaco) were the hottest couple in Port Charles for a very long time. But after Jason was gone for five year and presumed dead, it just wasn’t the same once he returned. Sam had moved on with Drew Cain (Billy Miller) who believed that he was Jason for awhile. Drew as Jason actually gave up the mob life to be with Sam and their kids, something the real Jason would never do, at least not up to this point. Sam and Jason finally called it quits when Cyrus Renault (Jeff Kober) threated to harm anyone related to the Corinthos organization, and Cyrus had no problem with murdering children. Keeping their kids safe meant to Sam that she and Jason should break up. It wasn’t what Jason wanted but he agreed that it was the right thing to do. But what if Jason doesn’t continue to work for Carly? Could there still be a change for Sam and Jason to reunite or has that ship sailed?

It’s doubtful that Jason would actually completely separate himself from the Corinthos Organization, so a reconciliation with Sam may not be in the cards right now. But Jason has another woman in his life now, and he promised to stick by her. Over the last few months, Jason and Britt have grown very close and even made love before they returned to Port Charles. Britt is also now dealing with the certainty that she has the genetic markers for Huntington’s Disease, which will eventually lead to a very unpleasant death if a cure isn’t found before then.

Britt hadn’t been facing the situation and didn’t get tested until Jason convinced her that it would be better to face the truth head on. And even though it was bad news, at least Britt knew the truth and could live her life free of that uncertainty. But that doesn’t mean Britt can just forget the fact that she could start having symptoms at any time. This would be the perfect time for Jason to show Britt how to live in the now, and enjoy today without worrying what tomorrow will bring.

GH Spoilers – Carly Corinthos Doesn’t Want To Be The Head Of The Organization!

Since it will keep her quite busy, Carly will begin to want to step down. So look for her to come up with a solution that she believes with get her what she wants. If she continues to stay in power she wont have as much time to make sure Jason and Britt don’t get too close, which is obviously a sticking point with Carly now. But chances are that Sonny will show up in Port Charles sooner rather than later, and when he does look for Carly to still be running the show! This will certainly change the dynamics of Sonny and Carly’s relationship as well, and the two of them may have grown too far apart during their separation.

Will Jason be able to just step in and take over the organization for Carly. Does Carly really want to give up that much power? Can she actually do the job or was the recent missing shipment a sign of bigger problems that are just now showing up? Can order be restored or will Jason have to take over by force. Should he ever bother when both Sam and Britt are romantic possibilities for the future, if he backs down somewhat. Perhaps its time for Jason to help Britt learn to live in the moment, even as Carly sulks. The mob rules can be complicated if your don’t understand how they run in Port Charles so stay tuned to General Hospital airing weekdays on ABC. And don’t forget to check back right here regularly for all your General Hospital news, information and spoilers!