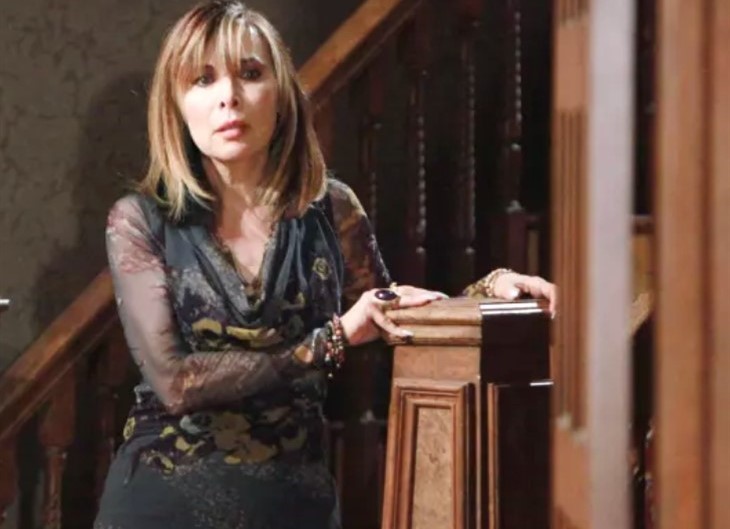 DOOL spoilers reveal that Kristen has always been a desperate woman who goes to extremes. This storyline is no different and we will see her take even more extremes before she is caught. During the week of May 17, Kristen will put on her Kate disguise and take drastic action to silence Lucas and Sami permanently.

In the new issue of Soap Opera Digest, “Kate” will approach Xander with a tempting offer. He is desperate for money and even failed to sell Sarah Horton’s (Linsey Godfrey) wedding ring. Kristen knows that he is extremely desperate for cash. So, she offers him a huge sum of money to kill Lucas and Sami. He can’t resist the offer and accepts the deal from the woman who he thinks is Kate.

Days of Our Lives spoilers reveal that Lucas and Sami are alarmed when Xander comes into the secret room. He is pointing a loaded gun at them both. Sami knows she has to think fast or they are literally dead meat. She knows that Xander has no job and is no longer on good terms with Victor Kiriakis (John Aniston). She also knows that he was so desperate for cash that he was trying to sell Sarah’s wedding ring. So, she uses that angle to try and negotiate with Xander.

Days of Our Lives (DOOL) Spoilers: Jake And Gabi Race To Save Kate https://t.co/Lo9zL5N4r9 pic.twitter.com/YLBEncgXS1

It turns out that Sami’s instincts are deadly accurate. She knows that Xander is just after the money and really doesn’t care if they live or die. He just wants the cash. So, Sami offers to pay him to double what “Kate” is paying him. It just happens to work and “Lumi” gets to live. Now, Xander isn’t really afraid of anyone. So, anyone else would be afraid to tell Kristen aka “Kate” that he was offered double to keep the hostages alive. However, Xander will have no problem telling “Kate” that he got a better offer.

The only thing is, will Xander also release “Lumi” from the secret room? Or will he just hand them over to their deranged captor? Will Kristen decide to kill Lucas and Sami herself? We will have to keep watching the NBC soap to see how this story ends.