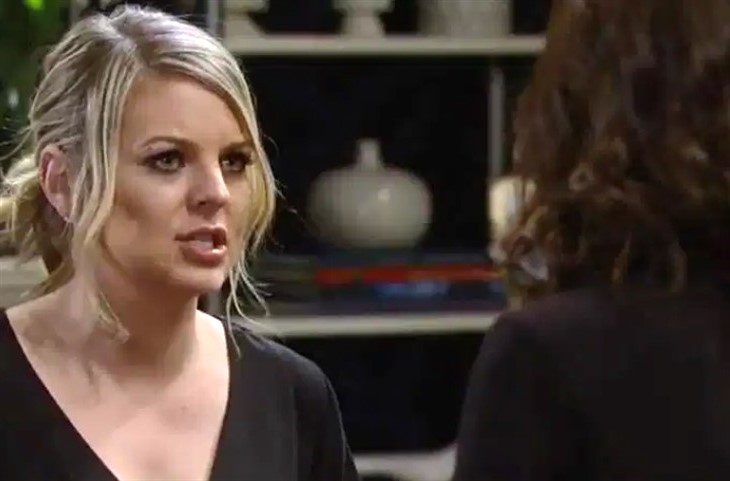 General Hospital (GH) spoilers for Monday, May 10, 2021, reveal Maxie’s plans going more and more awry but she’s determined to go through with everything anyway.

Maxie (Kirsten Storms) remains determined to keep her baby from Peter (Wes Ramsey) no matter what she has to do but things are becoming harder. While she doesn’t mean to be, Brook Lynn (Amanda Setton) is a loose cannon who can give away their game at any moment. Brook tells Maxie to trust her and Maxie is trying but it’s becoming harder and harder.

Then there’s Sam (Kelly Monaco) who Maxie reaches out to for help. Brook is driving her nuts and Britt (Kelly Thiebaud) is nowhere to be found. She knows Britt is somewhere with Jason (Steve Burton) and thinks Sam can track down Jason, but Sam wants to know what the heck is going on. Does Maxie pull Sam into her plan, too? The more people who know, the more of a disaster this can be.

GH Spoilers – Britt Westbourne Has Had It With Jason Morgan

It seems like Britt and Jason are growing closer by the minute, but that closeness can also come with frustration. The pair get on one another’s nerves and neither likes the way the other operates. Britt tells Jason she is ready to give up and wants out of his mess.

Will this be the break Maxie needs or will Jason convince Britt to stay with him while he’s on the run?

Peter and Cyrus run into each other at The Metro Court and share a drink and a meal. Peter tells Cyrus that things are getting better between him and Maxie, but Cyrus doesn’t buy it at all.

He warns Peter not to let his guard down. Once he becomes soft, everything he wants will disappear.

Carly (Laura Wright) is an emotional mess after Jason’s surgery, the meeting with the Five Families, and her conversation with Sonny (Maurice Benard) she created in her mind.

Thankfully, she has her daughter there to comfort her but is a teenager enough. Carly is beside herself and cries to Joss (Eden McCoy) that everything is on her. She clearly needs a friend her age. Stay tuned to General Hospital weekdays to see how these stories play out.