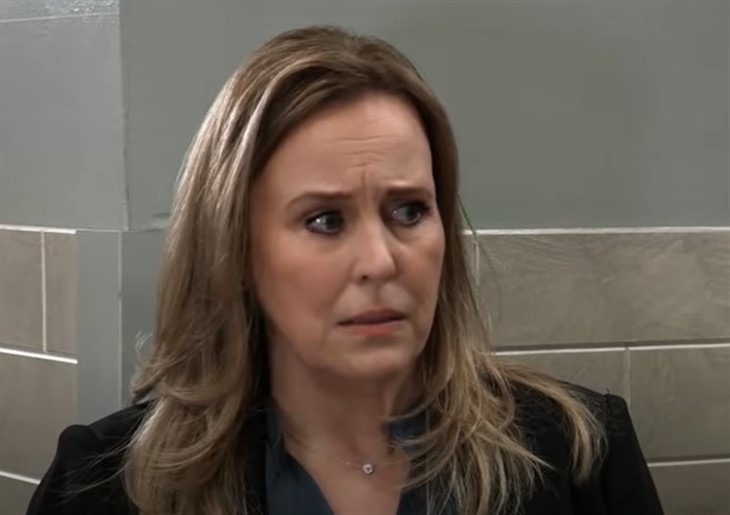 General Hospital (GH) spoilers show Laura Collins (Genie Francis) is the dedicated Mayor of Port Charles. She has the respect of her friends, family, and people of Port Charles. She is the mother of Lucky Spencer (Jonathan Jackson), Lulu Spencer Falconari (Emme Rylan), and Nikolas Cassadine (Marcus Coloma). Her husband on General Hospital is Dr. Kevin Collins (Jon Lindstrom). Laura thought that she knew about her all of her family. However, recently GH spoilers revealed she had two brothers.

According to GH spoilers and recaps, Laura’s mother Lesley Webber (Denise Alexander) had been in relationship with her college professor Gordon Grey (Eric Server). It was a short relationship but Laura was the product of the relationship.

Gordan had a family that was torn apart because he was unfaithful to his wife Florence Grey (Annie Abbott). He had two sons that went down different life paths. Martin Grey (Michael E. Knight) became a successful lawyer. Cyrus Renault (Jeff Kober) went into a life of crime and is the head of his own drug empire. Now, General Hospital’s Laura has two very different brothers that she does not know if she can get close to.

Laura does not trust Cyrus. She sees him as a threat to Port Charles. Cyrus is a dangerous crime boss that is not afraid to use family members to get people to do what he wants them to do. Recently Cyrus was responsible for the bombing at the Floating Rib. Laura’s daughter Lulu was in the restaurant when the bomb went off. She was seriously injured and is in a coma.

According to GH spoilers, Laura does not have proof that Cyrus responsible but she is trying to find the evidence. Cyrus is the Chairman of the Board at General Hospital. He got the position to get respect from the community and use the hospital as a front for his criminal activities. Recently Laura and Lesley stopped Cyrus from getting an experimental drug approved. Cyrus was angry with Laura. However Cyrus has wanted to get Laura’s approval in the past. He has tried to get Laura to feel a connection with him. Can Cyrus get Laura to trust him?

Laura feels that she can trust Martin. Laura was trying to find out the truth about Cyrus. She found his mother Florence in a long care facility which is where she found out about Martin and Cyrus being her brothers. Laura was impressed with the strong relationship that Martin has with his mother. Martin wants to have a relationship with Laura. He and Cyrus are not close.

However, General Hospital’s Martin has helped Cyrus from time to time in the past. Laura does not know what Martin has done to help Cyrus. In the past, GH spoilers and recap show Cyrus had TJ Ashford (Tajh Bellow) kidnapped to get his mother Commissioner Jordan Ashford (Briana Nicole Henry) to help him with his drug shipments. TJ had been held by a man that had a Southern accent. Martin has a Southern accent. Could Martin be the one who helped Cyrus to keep TJ? If Martin did help Cyrus can Laura trust Martin?

General Hospital spoilers tease Laura does not know if she wants to have a relationship with either Cyrus or Martin. Laura likes Martin but does not know what he might be willing to do. Martin has represented some questionable clients. Will Laura find out that Martin has a hidden dark side?

Laura believes that Cyrus is threat to Port Charles. She wants to make sure that he does not keep hurting anyone. Could Laura try to get close to Cyrus to try to get him to become a better man? Tune into General Hospital to find out if Laura will get close to either one of her different and complicated brothers.  Check back here for more GH spoilers, recaps, and updates.

The Bold And The Beautiful Spoilers: Steffy’s Dreams Coming True Thanks To Finn