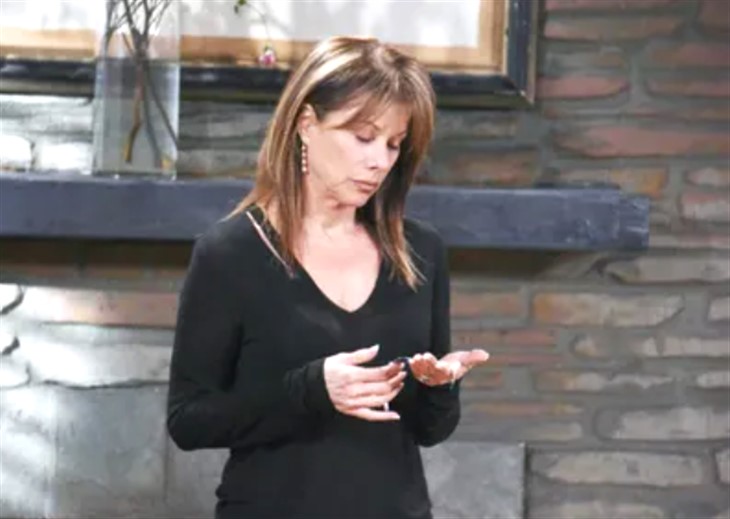 General Hospital (GH) spoilers suggest that the week of March 15th- March 19th will start with Ned Quartermaine (Wally Kurth) returning home and begging Olivia Quartermaine (Lisa LoCicero) for forgiveness. What else is going on in and around Port Charles this week?

#1 Carly Corinthos And Liz Baldwin Will Have A Problem

General Hospital’s Franco Baldwin (Roger Howarth) has recently been murdered and Liz Baldwin (Rebecca Herbst) is convinced that Jason Morgan (Steve Burton) is the assassin. Carly Corinthos (Laura Wright) knows that Liz is grieving but she also knows that Jason is innocent. Carly and Liz will clash as Carly defends Jason. Will Jason be able to prove his theory of who killed Franco?

#2 Ned Quartermaine Wants His Wife Back

General Hospital’s Ned will return home and beg for Olivia’s forgiveness. However, Olivia is not even close to the point at this time. Olivia is still extremely upset over Ned’s infidelity and isn’t likely to get over it any time soon. Ned better be prepared because his family situation is about to change again. Will Olivia ever forgive him?

General Hospital’s Dante Falconeri (Dominic Zamprogna) and Sam McCall (Kelly Monaco) have been spending a lot of time together lately. Fans are wondering if these two are about to try their chances at a romance. However, Sam’s priority is more than likely going to be proving Jason Morgan’s (Steve Burton) innocence in Franco’s murder. Of course, this also means proving Peter August’s (Wes Ramsey) guilt to protect Maxie Jones (Kirsten Storms).

#4 Alexis Davis Continues To Struggle With Her Sobriety

General Hospital’s Alexis Davis (Nancy Lee Grahn) will continue to struggle with her sobriety. Alexis has been on a continuous drunken binge since Neil Byrne’s (Joe Flanigan) death months ago. Alexis is about to face a major challenge that will test her commitment. However, Kristina Corinthos-Davis (Lexi Ainsworth) will soon find herself upset over her mother’s situation. What will Alexis’ next hurdle be?

#5 Brando Corbin Will Have It Out With Gladys Corbin

General Hospital’s Brando Corbin (Johnny Wactor) will finally get to have it out with Gladys Corbin (Bonnie Burroughs). Gladys running her mouth about Dev Cerci (ex-Ashton Arbab) not being Brandon’s biological son has placed but him and that Corinthos family in danger of prosecution. Gladys had to give this information to none other than Cyrus Renault (Jeff Kober). Gladys will face the music with Brandon who could easily cut his mother out of his life for good. Gladys better hope that she doesn’t run into Carly on her trip to Port Charles.

General Hospital spoilers suggest a very exciting week ahead. Be sure to pull up a front-row seat for all the drama and mayhem.