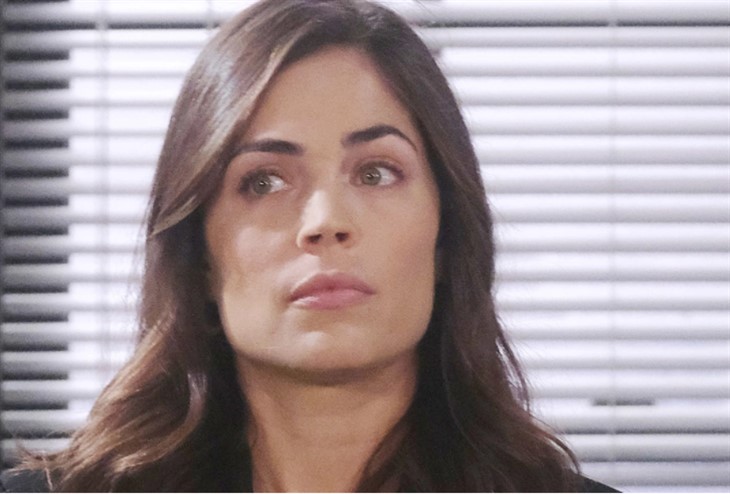 General Hospital (GH) spoilers tease that Britt Westbourne (Kelly Thiebaud) will open up to Jason Morgan (Steve Burton) about her medical condition while the two are on the run together in upcoming episodes of General Hospital!

General Hospital viewers will recall that when Carly Corinthos’ (Laura Wright) escape plan for Jason went oh so wrong in a recent episode of General Hospital, Jason and Britt rescued each other when it came right down to it. Jason was all ready to get in the car with Brick (Stephen A. Smith) but then he noticed Britt wasn’t there and went back into the hospital to look for her! He saved Britt’s life as two of Cyrus Renault’s (Jeff Kober) goons was trying to kill her with a syringe full of drugs in Cyrus’s direction. Cyrus had received a call from one of his plants at General Hospital, and Britt had mistakenly thought he was one of the Corinthos henchmen sent by Jason. If it weren’t for Jason,

Britt would have died, but on their way out, Cameron Webber (William Lipton) shot Jason in the back, still believing that Jason killed his beloved stepfather Franco Baldwin (Roger Howarth)! Cameron’s mother, Elizabeth Baldwin (Rebecca Herbst) had just come to believe Jason was innocent herself, having been told by Dr. Hamilton Finn (Michael Easton) that Peter August (Wes Ramsey) had killed Franco as well as poisoned Detective Harrison Chase (Josh Swickard)! Britt rushed a wounded Jason to comparative safety but told him he had to close his wound to keep him from bleeding out in less than perfect circumstances!

General Hospital viewers will remember that Britt has been having problems with one of her hands. It has gotten shakier and shakier over time, and whether she has actually been diagnosed or not she more than likely assumes she has Huntington’s Disease because her birth father, Cesar Faison (Anders Hove) did. Huntington’s does sometimes present with symptoms similar to Parkinson’s Disease or it may simply be a condition called essential tremor. She may experience problems with her hand when she was closing Jason’s wound, which would require stitches!

General Hospital viewers will have noticed Britt’s hints several times that she may be dying – which of course she would probably assume if she assumes she has Huntington’s Disease! Jason will want to know what is wrong with Britt’s hand. He has come to care for her and has bonded with her – if he had not, he would not have endangered his own life by turning back and searching for her in General Hospital instead of getting in the car with Brick!

Jason will finally get the truth out of Britt, the truth that she has been hiding from everyone who cares about her. It is obvious that she has been minimizing her symptoms and her worries about what is going wrong. But Britt and Jason have bonded and become close with each other and will continue to become closer as they are on the run together, and she will finally open up to him about her suspected medical condition.