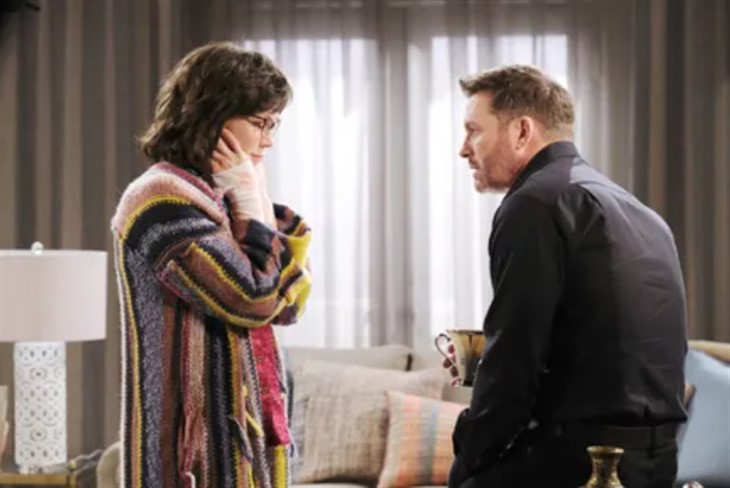 Days of Our Lives (DOOL) spoilers reveal that Brady Black (Eric Martsolf) visits “Kristen DIMera” (Stacy Haiduk) in prison. However, Susan Banks (also played by Haiduk) goofs up while impersonating the villain. Brady comes to a horrifying realization and races to save Chloe Lane (Nadia Bjorlin) before it’s too late. Is this what leads to his upcoming medical emergency?

‘DOOL spoilers reveal that Susan made the mistake of agreeing to help Kristen. She actually traded places with her so Susan was incarcerated while the felon was running around Salem. Susan probably only thought she would be there a few days or even a few weeks. However, it’s been months and Kristen shows no signs of going back to prison on her own.

Kristen made a deal with Vivian Alamain (Linda Dano), who was supposed to be sure Susan didn’t mess up. However, when Brady visits the prison, “Susan” makes a huge mistake in front of Brady. While Susan could be forgetful, there is also the chance that her “mistake” was intentional.

It is teased that Brady won’t be able to excuse or ignore the tell-tale sign that it’s Susan he’s talking to instead of Kristen. The last time that Kristen broke out of prison, she nearly killed Chloe. Brady most likely knows that Chloe is in danger, especially since they admitted their feelings for one another.

Days of Our Lives spoilers reveal that in the same week, Kristen will make a devastating discovery. It has to be Brady and Chloe becoming a couple. There is nothing that will prove “Susan” is actually Kristen than some awkward PDAs.

Days Of Our Lives (DOOL) Spoilers: Have Chad And Abigail Reached The End Of Their Marriage? https://t.co/EIZvg22X74 pic.twitter.com/jSGxQe9QSj

It is confirmed that Brady has to be rushed to the hospital. Once again, his life could be hanging by a threat. It is teased that Kristen is horrified to find out that what happened to Brady is because of her. There is a pretty good chance that Brady survives the ordeal as there is no news on Martsolf leaving. Just like at the beginning of this storyline, Chloe will stay by Brady’s hospital bed. She will hold onto hope that Brady will eventually wake up.

No matter how she tries to excuse, justify or explain her behavior , Brady is done with Kristen DiMera forever. As for how she exits, it is stated that she goes back to prison and has many more years added to her sentence. Knowing Kristen, she will probably manage to escape at least one more time. Let’s just hope she stays out of Salem.