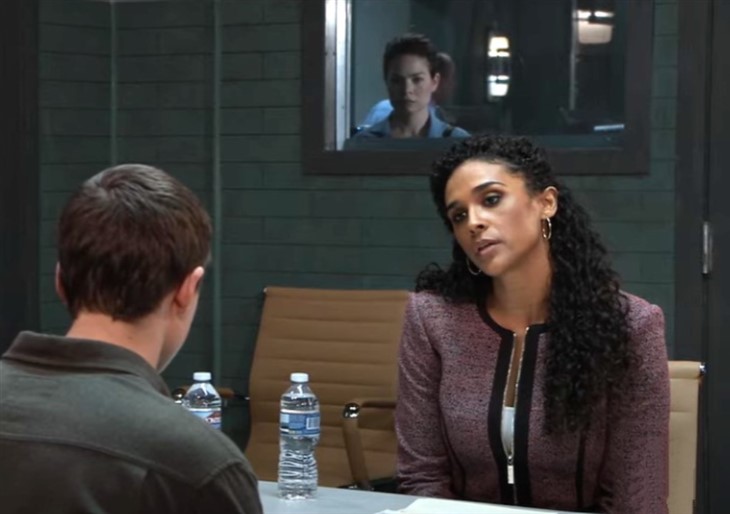 General Hospital (GH) spoilers for Tuesday, May 4, 2021, reveal Cameron in a whole lot of trouble he was not really looking or as Jason fights for his life.

General Hospital Spoilers – The Aftermath Of A Shootout

Jordan (Briana Nicole Henry) catches a confused and frightened Cam (Will Lipton) with a gun in his hands and tells him to drop the gun now. When Elizabeth (Rebecca Herbst) and Finn (Michael Easton) find Cameron and get wind of the situation, Finn warns Cam not to say another word.

The young man clearly needs a lawyer although he was in the wrong place at the exact wrong time. He picked up the gun out of fear but didn’t hurt anyone. However, he has made it clear he wanted Jason (Steve Burton) hurt because he thought he killed Franco (Roger Howarth).

And Jason is hurt. Britt (Kelly Thiebaud) manages to get him to a safehouse and it really is a good thing she is a doctor because she warns Jason if she doesn’t stop the bleeding, he will die. Hopefully, Britt doesn’t get any tremors as she tries to save Jason’s life.

GH Spoilers – How Did It All Go Wrong?

Cyrus (Jeff Kober) can’t believe he allowed the entire situation with Jason to go terribly awry. He also managed to lose Britt Westbourne in the process when he thought he had the perfect chance to kill her and make it look like an overdose. (Neil Byrne, anyone? Calling Alexis…)

Brick (Stephen A. Smith) also pays a visit to Carly (Laura Wright) and tells her that nothing with Jason’s escape went quite as planned. General Hospital spoilers say that Carly lets her presence be known. Does she arrive at GH demanding answers? That would be a Carly thing to do.

Those not focusing on the hospital shooting have other things on their mind. Deputy Police Commissioner Mac Scorpio (John J. York) asks Dante (Dominic Zamprogna) to return to the force but he says his situation is not as simple as it seems. Dante has been doing better of late, but Liesl Obrecht still has that pen. And Dante has still not completed the damn mission. (Bad Dante!)

Finally, Sasha (Sofia Mattsson) wants to have a talk with Brando (Johnny Wactor) and he wonders if she regrets what happened between them the other night. Stay tuned to General Hospital weekdays to see how these stories play out.