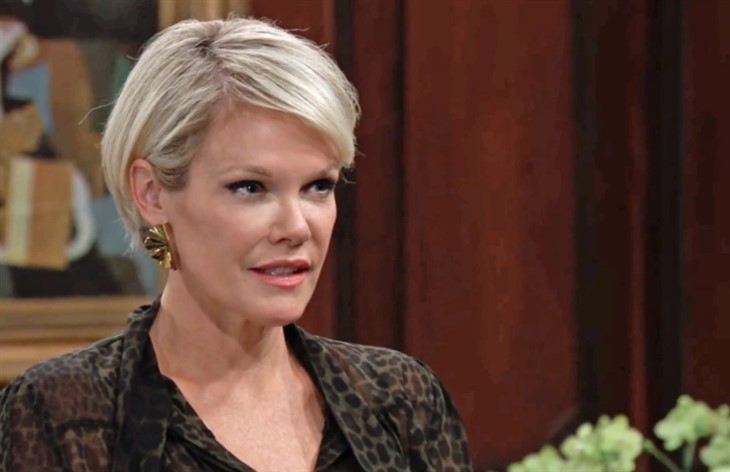 General Hospital (GH) spoilers tease that Ava Cassadine (Maura West) will receive upsetting news in an upcoming episode of General Hospital. She will find out that the stalker apparently knows hers and Nikolas Cassadine’s (Marcus Coloma) every move!

General Hospital viewers will recall from a recent General Hospital episode that the stalker, whoever he or she is, has a spy right there in the Metro Court where the Cassadines had moved to for their safety! Detective Dante Falconeri (Dominic Zamprogna) had advised the family to move from Spoon Island when a knife was found in a family photo and stuck on the inside of one of the interior doors. Whoever this person is, it is unclear who the target is – Ava or Nikolas, or possibly both of them.

Dante thought maybe the stalker was after Nikolas because of the placement of the knife. Both Ava and Nikolas have thought that it perhaps could be Ryan Chamberlain (Jon Lindstrom) faking his “locked in syndrome” or someone copycatting Chamberlain who is very familiar with the case and the criminal. Recently, a bartender at the Metro Court had called someone letting them know that at their request, the key to Nikolas’ Metro Court suite had been cloned!

That, of course, allows whoever the stalker is to enter the hotel suite where they moved into for their own protection, as Dante had suggested. It may be either Nikolas or Ava who makes the discovery of the next morbid “gift” which likely will be inside their Metro Court suite, but later Ava will have to make another call to Dante – this time about something in her art gallery!

General Hospital viewers will likely never forget Ryan’s first “gift” to Ava – the decapitated body of Nurse Mary Pat Ingles (Patricia Bethune) in her office chair at the gallery, complete with a Jack O’Lantern where the head should be! It was Halloween when his reign of terror started – and Carly Corinthos (Laura Wright) found her head, while bobbing for apples at The Floating Rib! This would go right along with a copycat Ryan Chamberlain! One of the morbid gifts was a hand – General Hospital viewers will recall Ryan cut off one of his hands and sent it to his brother, Dr. Kevin Collins (Jon Lindstrom) in an effort to fake his death.

The hand was determined to be a hand from an anatomical model used in medical schools, and if Ava’s gallery was targeted the rest of the anatomical model might be in her office chair! There is also a good chance that there will be some vandalism at her art gallery, possibly animal blood smeared and poured. There could be slashing of paintings and broken sculptures as well. Unfortunately, almost every aspect of Ryan’s last reign of terror and his obsession with Ava was publicized, and well publicized.

The stalker may make it difficult to tell whether his or her target is Ava or Nikolas, thus hindering any police investigation. Ava and Nikolas soon realize that whoever it is, the stalker knows their every move, whether they are together or apart at the time! Could there be more than one? Are they working together?

The Young And The Restless (Y&R) Spoilers: Is Chelsea Plotting Again – Kyle Celebrates