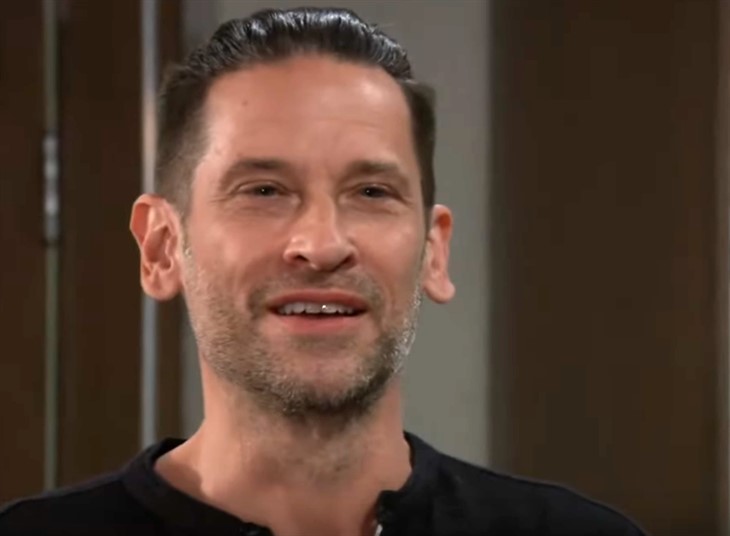 General Hospital (GH) spoilers tease that Austin (Roger Howarth) will crash the ELQ board meeting and reveal his true identity in an upcoming episode of General Hospital!

General Hospital viewers will recall that before anything else, Austin retained Scott Baldwin (Kin Shriner) to find out more about the Quartermaines. Of particular interest to Austin was the Michael Corinthos (Chad Duell) wing at General Hospital, which deals with pediatric head injuries. Austin has wondered why Michael goes by Corinthos instead of Quartermaine, so he obviously must be aware of some of the Quartermaine family history. In a recent episode he applied for a job at General Hospital with current Chief of Staff Britt Westbourne (Kelly Thiebaud) who questioned why he wanted to move to Port Charles and work at GH when he had a thriving private practice in Pautauk, New York.

Austin said he had some business to take care of in Port Charles, and it might take a while so he may as well relocate and work while he is there. He also is concerned about the outcome of Maxie Jones (Kirsten Storms) and the baby he delivered, Louise Jones (Harper and Scarlett Bloom) who was “kidnapped” while he was out cold in the woods. Austin approaches Carly Corinthos (Laura Wright) ahead of the ELQ board meeting, which he read about in Port Charles news on his tablet. He asks her some questions about the wing bearing her son’s name, and he may likely ask her about Michael going by “Corinthos” as well as some possible questions about AJ Quartermaine (Sean Kanan). Since Carly and Jason Morgan (Steve Burton) are planning a marriage, she may bring Jason in to answer some of Austin’s questions as well.

General Hospital viewers will recall from a recent episode of General Hospital that when Anna Devane (Finola Hughes) and Valentin Cassadine (James Patrick Stuart) were looking for clues about the missing Louise Jones in Pautauk, Austin allowed them to stay in one of his rentals. This was the same rental where Maxie was taken by Fake Chloe Jennings aka Marie Hopkins (Kimberly J. Brown) took her. It appears this is also the house where Austin grew up, as Anna found a box of family photos and one had Austin as a child.

She told Valentin she knew Austin’s father. More than likely, Scott would remember Austin’s father as would Monica Quartermaine (Leslie Charleson). Longtime General Hospital viewers will recall that one of Edward Quartermaine’s (John Ingle) affairs, with a woman named Beatrice Le Seur (Marcella Markham) produced a son who had been put up for adoption and then sought out his birth parents. That was Jimmy Lee Holt (Steve Bond). He had married a woman who ran a general store in Pautauk, New York named Charity Gatlin (Gloria Carlin). While General Hospital history doesn’t state that Jimmy Lee and Charity had any children together, although she had a son from a previous marriage, it’s a good possibility that Austin’s last name is Holt.

That would mean Austin would be a first cousin once removed to Ned Quartermaine (Wally Kurth) and Dillon Quartermaine (Robert Palmer Watkins) as well as Jason and Drew Cain (Cameron Mathison) and a second cousin to Michael and Brook Lynn Quartermaine (Amanda Setton). Tracy Quartermaine (Jane Eliott) would be his niece. Austin will crash the ELQ meeting likely with Scott making the big announcement, which will be intriguing news to Monica both because Austin is coming to work at GH and because he’s a Quartermaine relative. Austin will take a personal interest in seeing whether Valentin is ousted as CEO of ELQ as well!