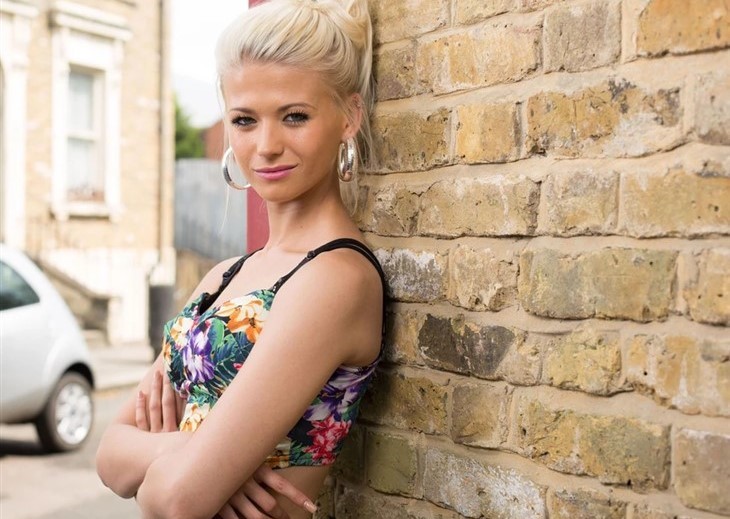 EastEnders spoilers and updates tease that Isaac Baptiste (Stevie Basaula) will continue to struggle with his mental health at a time when Lola Pearce (Danielle Harold) realizes that she wants to have a future with Isaac. Danielle Harold, the actress who portrays Lola weighs in on what the future holds for the pair.

Fans know that Isaac has decided to stop taking his schizophrenia medication. Since then, he’s been struggling with his mental health. Things are about to get much worse next week. He truly believes that Ruby Allen (Louisa Lytton) has something to do with the death of his brother, Paul so he breaks into her home. Lola will feel “sheer panic” because she didn’t think it would get this bad.

Harold said that Lola doesn’t know that much about Isaac’s mental illness aside from the information that she got from Sheree Trueman (Suzette Llewellyn). But she’s doing all she can to understand Isaac’s condition after learning that he’s schizophrenic. Even so, Lola has already developed romantic feelings for him.

Lola realized that she loves him when Isaac’s condition started to worsen. She got so worried about him and just wants Isaac to recover. The troubling scenes next week will make Lola reflect on the fact that she knew Isaac went off his meds and didn’t say anything.

Harold said that Lola is the only one who knows that Isaac has stopped taking his medicines. Since then, his condition has gotten worse. The actress said Lola didn’t think it was a good idea, at first, and even begged Isaac to retake them. But her concerns abated when the nurse said that he’s doing fine. She thought Isaac was doing fine without his medication. She started to regret not saying anything when he started to show some problems.

Patrick Trueman (Rudolph Walker) and Kim Fox (Tameka Empson) were giving Lola a cold shoulder the past few months. But things will be different between the trio after Isaac’s break-in. Harold firmly believes that Patrick and Kim should try to accept Lola because she’s trying her best. She’ll also reach out to them since Sheree’s dominant attitude is making things more difficult for Lola. Lola will also feel that Isaac isn’t getting the support he needs from his family.

Preparing For The Storyline

Harold revealed that she worked with Mind’s Media Advisory Team to help her prepare for the storyline. She praised the team for being helpful and for all the advice they gave. The actress also pointed out that it’s important to tackle such storylines. She can only hope that they can help viewers who are facing the same struggles at home, in some way.

Days Of Our Lives (DOOL) Spoilers: Chanel Has A Confession For Allie – Bonnie Devastated