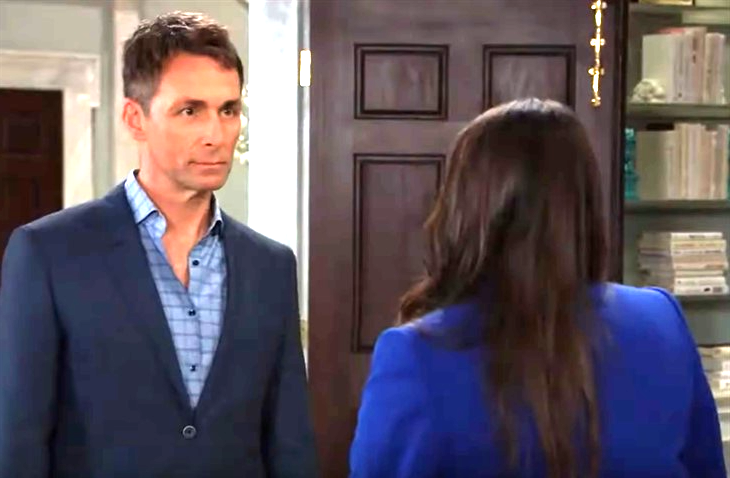 General Hospital (GH) spoilers indicate that in Port Charles, NY Valentin Cassadine (James Patrick Stuart) will be heartbroken once he discovers that Brook Lynn Quartermaine (Amanda Setton) was never pregnant with his child and that the baby she presented to him is actually Maxie Jones’ (Kirsten Storms) missing little girl. As viewers know, Maxie needed to make sure that her baby’s father, Peter August (Wes Ramsey), couldn’t find their little girl, so she gave her baby to Brook Lynn until Peter was caught. Brook Lynn had been faking her own pregnancy in a plot to get Valentin to give her back her shares of ELQ. Valentin agreed, but only after the baby was born.

General Hospital Spoilers – Brook Lynn Quartermaine will eventually have to confess everything!

When it’s time for Maxie to reclaim her daughter, both Brook Lynn and Valentin will be devastated. Brook Lynn will realize just how badly she hurt Valentin and will want to make it up to him if she can. She may even believe that an actual baby would make everything all right. Valentin will be angry at Brook Lynn, as well as Maxie, but he will likely eventually come to understand. Valentin started all of this with Brook Lynn when he hired a sleazy agent to hold Brook Lynn’s musical career hostage. And while Valentin had no idea at the time, the agent also tried to force Brook Lynn into a sexual relation if she wanted to be able to perform music at all. Brook Lynn had to sign over her shares of ELQ to the agent, who in turn gave them to Valentin in his bid to takeover ELQ.

Even though Brook Lynn might believe an actual baby of their own would make things right, Valentin will likely want nothing to do with the idea, or with Brook Lynn. They have each gone out of their way to deceive one another, and Valentin will likely never trust her again, and certainly not with their child. Brook Lynn may even realize this and try to seduce Valentin again before he discovers the truth. But that won’t be easy, as Valentin has realized his love for Anna DeVane (Finola Hughes) is stronger than ever. So without a baby bonding them together, the two of them will likely for their separate ways.

Will Brook Lynn try to seduce Valentin before he discovers the truth about their baby? Will Brook Lynn end up pregnant for real? Will Valentin want anything to do with Brook Lynn after he learns the truth? Or will they go their separate ways after Maxie gets her baby back? Baby can bring couples together as well as tear them apart in Port Charles, so stay tuned to General Hospital airing weekdays on ABC. And don’t forget to check back right here regularly for all your General Hospital news, information and spoilers!