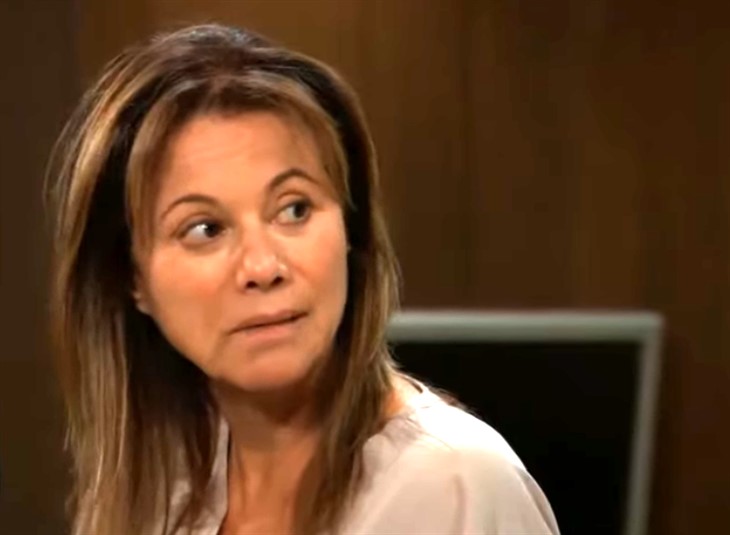 General Hospital viewers will recall that Alexis was shocked to see Ryan being rolled into the community room of Spring Ridge prison in a wheelchair! She didn’t understand how a prison that was not supposed to have any violent offenders would take someone with his rap sheet! General Hospital viewers saw Alexis get up close and personal, right in Ryan’s face, questioning if he was really as “locked in” as he claimed to be. Alexis got down and dirty as she taunted Ryan, trying to get a response that would reveal his pretended façade. She waved her hands in front of his eyes – to see if he would blink. However, that would not have proven he was faking locked-in syndrome. Sufferers of the rare neurological condition are able to think and communicate through blinking and other functions of their eyes.

General Hospital viewers will recall that the last time Harmony Miller (Inga Cadranel) was seen, she had gotten released from Pentonville Prison – but she was working for Cyrus Renault (Jeff Kober). Previously, she had worked for the late David Henry Archer, aka Shiloh (Coby Ryan McLaughln) as an important part of the Dawn of Day cult which he had led. General Hospital viewers will also recall that she is Willow Tait Chase’s (Katelyn MacMullen) mother, and has not been seen or mentioned for months! According to a leaked script from a couple of months ago, Alexis goes to her Alcoholics Anonymous meeting and sees a woman being very friendly with Ryan. Alexis will recognize the woman as Harmony Miller and questions the minimum security prison guard who is escorting her as to why the woman is with Ryan. Harmony is obviously a visitor, not an inmate, as the guard tells her Harmony brings Ryan mail and other items from the outside.

This General Hospital scene likely picks up from the one where the guard tells Alexis why Harmony is with Ryan, and General Hospital viewers know that Alexis is not one to keep her opinions inside! Harmony was partially the cause of many long months of trying to free Alexis’ daughter Kristina Corinthos-Davis (Lexie Ainsworth) from the bizarre cult. Kristina was rescued from the cult house just as Harmony was preparing her for full initiation – meaning rape by Shiloh, the cult leader. This was how Harmony’s own daughter, Willow had been conceived. Kristina had been drugged with an herbal tea that basically acted as a date rape drug, so it is no surprise that Alexis will wonder about Harmony as to what she is doing helping Ryan! General Hospital viewers may find it inconceivable that Harmony would not know who and what Ryan is, although with spending so much time in a cult it is possible.

General Hospital viewers can imagine that Alexis will have a difficult time not relating Harmony’s relationship to Ryan to her past relationship with Shiloh. She will confront Harmony, accusing her of having ulterior motives for helping Ryan, and leave no doubt in Harmony’s mind exactly what she may be aiding and abetting him in on the outside! Considering she knows that her nephew Nikolas Cassadine (Marcus Coloma) is having to accept an unwanted and heartbreaking divorce from his wife Ava Cassadine (Maura West) because of a stalker appearing to be Ryan, she will likely accuse her of delivering the “gifts” as well as bringing things to Ryan on the inside! Perhaps Harmony’s ulterior motives are tied to a romantic connection with Ryan – after all, she left her husband for Shiloh, another criminal, in the past. If so, Harmony would not be the first lonely woman to write to a criminal behind bars and fall in love! Obviously, she must be picking up his responses to her as well – proving Ryan’s not as “locked in” as he pretends, which is something Alexis suspects!