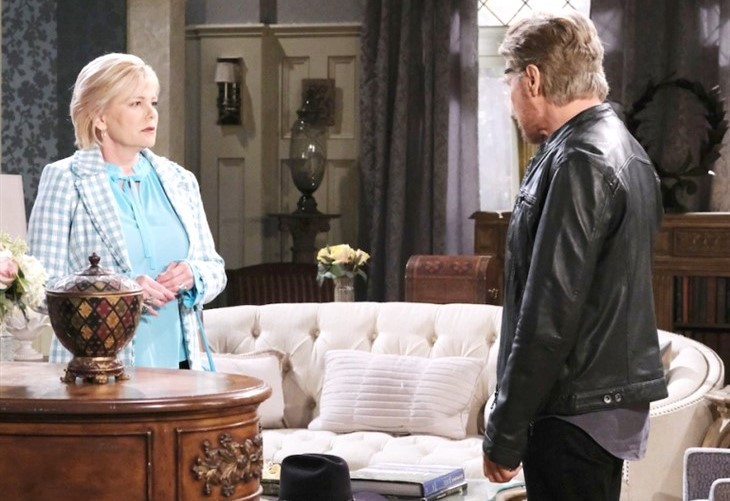 Days of our Lives (DOOL) spoilers and updates tease in Salem Bonnie Lockhart (Judi Evans) wants to be in Justin Kiriakis (Wally Kurth) life completely. Justin lost his wife Adrianne Johnson (Judi Evans) who tragically died. He was devastated by her loss. He tried to be in a relationship with Kayla Brady (Mary Beth Evans) but she went back to the love of her life Steve Johnson (Stephen Nichols). Justin was able to find an unlikely love with Bonnie. Steve is having trouble accepting Bonnie being with Justin because Adrianne was his sister.

Kayla wants to see Justin find happiness again. She knows how hard it was for him to lose Adrianne. She tried to be the one to heal his broken heart. However, Kayla could not stay away from Steve. Kayla was not happy with how the double date with Bonnie and Justin turned out. Bonnie called Kayla to ask her to come have drinks with her. Bonnie had an important question for Kayla. She wanted Kayla to be her maid of honor at her wedding to Justin. Kayla was surprised by Bonnie’s request. Kayla was unsure if Justin would want to marry Bonnie.

Days of Our Lives Bonnie is determined to get Steve and Kayla to be happy that she and Justin are together. Bonnie asked Justin to marry her but he rejected her proposal. Bonnie was crushed by the fact that Justin had refused to marry her. Justin told Bonnie that he wanted to be the one to ask her to marry him. Bonnie accepted the proposal happily. Bonnie will want to get Kayla to be her maid of honor. Can Bonnie get Kayla to be her maid of honor at her wedding to Justin? Bonnie will want to try to convince Steve that even though she is not like Adrianne that she loves Justin. Can Bonnie convince Steve to give her a chance to prove to him that she can be good for Justin even though she is not like his beloved sister?