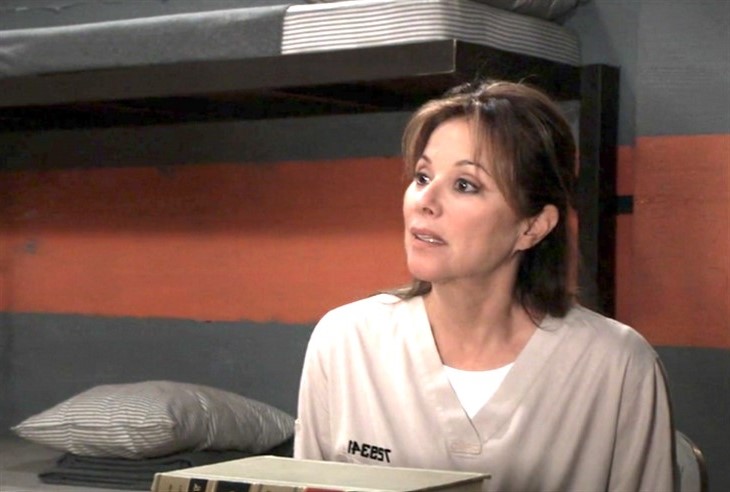 General Hospital (GH) spoilers reveal Alexis in shock that Ryan Chamberlain is at the same country club prison she was sent to. Why would a serial killer be in this place, even if he is catatonic?

Alexis (Nancy Lee Grahn) wonders if she can try to prove that Ryan (John Lindstrom) is not catatonic at all now that she has such close contact with him so she gets right in his face to see what kind of reaction he gives her. So far, Ryan seems pretty catatonic to her but she’s still not buying it.

However, her visitor is even more interested in the fact that Ryan is in this place than Alexis is. When Nikolas (Marcus Coloma) stops by to see how she’s doing in her latest prison home and finds Ryan there he wonders how someone who truly seems incapacitated could be stalking Ava (Maura West). Now, it looks like Alexis and Nikolas both want to test the waters with Ryan.

When Nikolas notices that Ryan isn’t moving and isn’t responding he thinks that Ava is way off base thinking has been stalking them and in the back of his mind wonders if it could be Spencer (Nicholas Chavez). After all, he never wanted him to be married to Ava and he reappeared as soon as he learned Nikolas and Ava were divorcing. Plus, fake blood coming from the ceiling is such a teenage prank and not something a seasoned sociopath would do.

The problem is Nikolas doesn’t want to believe his son went this far to ruin his marriage. He wants to believe that Spencer came home on his own and forgave him for marrying Ava. Spencer has even pretended to feel sorry for Nikolas and seems so genuine with his concern.

Even when Nikolas is gone, Alexis is determined to figure Ryan out. His catatonic state never made sense to begin with and him being in the same prison she is in makes even less sense. Perhaps Alexis will be the one to bring Ryan back to life. Stay tuned to General Hospital weekdays to see how this story plays out.

Days Of Our Lives Comings and Goings: Marla Gibbs Joins The Cast And A Backstreet Boy Debuts