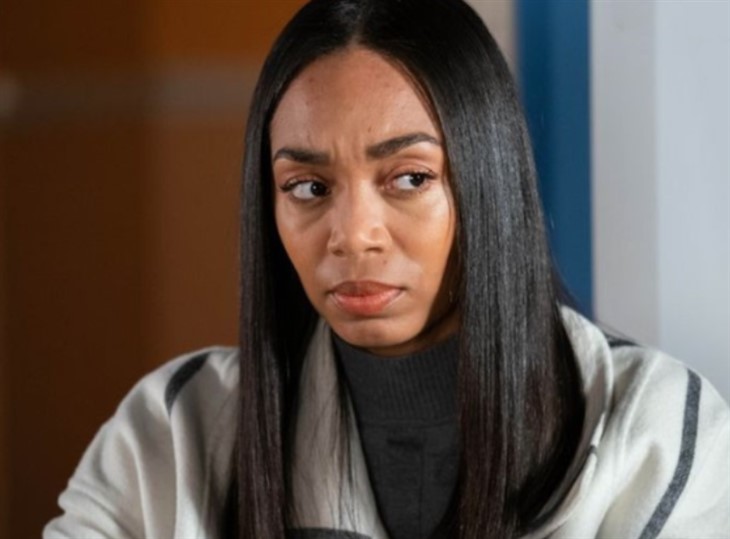 EastEnders spoilers and updates tease that Chelsea Fox (Zaraah Abrahams) will get a disturbing warning to stay away from Gray Atkins (Toby-Alexander Smith) while she still can. Will she listen to the warning? Or will she suffer a dark fate once she uncovers Gray’s dark secrets?

Fans know that Chelsea’s been flirting a lot with Gray and she has fallen head over heels for the lawyer. Things are moving too quickly when Gray gives her a spare key to his home.

In upcoming scenes, Chelsea will knock over a plate that Mia Atkins (Mahalia Malcolm) gave to Chantelle. She’ll pretend that she’s going over her case when Gray and his kids return home. How will Gray react when he finds out about Chelsea’s earlier mistake?

Later on, Chelsea heads to court for her possession of stolen goods case. She’ll be granted bail but she needs to wear an ankle tag. Despite that, Chelsea still wants to go to Gray’s work drinks.

At Gray’s work function, Chelsea tells Gray they should drink as much free booze as they can. The latter soon gets drunk and starts to embarrass himself in front of his boss, Laura. The latter, who knows about Gray’s dark side, warns Chelsea to stay away from him while she can.

Gray wakes up late the next day with a hangover. He phones Laura after missing a meeting and the latter tells him that she’s unhappy with his performance, leaving Gray irritated. What will Gray do now? Will he take out his frustration on someone else?

Chelsea may be excited about her blossoming romance with him but many people are not keen on seeing them as a couple. Obviously, Chelsea has no clue what Gray’s capable of. He has killed three residents in the past year and managed to get away with it.

Viewers may recall that Gray abused and manipulated Chantelle Atkins (Jessica Plummer). He left her in the hospital suffering painful injuries while making sure that she’s isolated from her loved ones. Before Chantelle died, she finally decided to leave him for good. Unfortunately, it only led to her untimely death.

Tina Carter (Luisa Bradshaw-White) uncovered Gray’s dark secret. The latter made sure that she kept her silence by killing her as well and pretending that she left the country. His third victim was Kush Kazemi (Davood Ghadami). Gray became overly jealous of his relationship with Whitney Dean (Shona McGarty). He got rid of him but pushing Kush in front of a train, making it look like his death was an accident. Will Chelsea be his fourth victim?