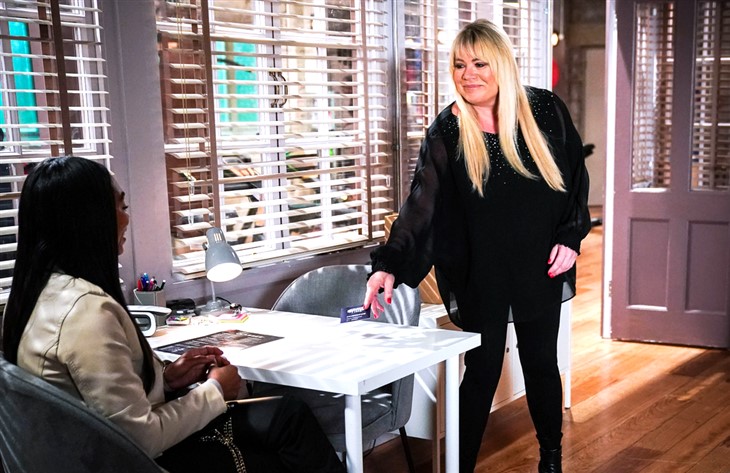 EastEnders Spoilers hint that Chelsea Fox (Zaraah Abrahams) may seek some advice in upcoming episodes. Chelsea recently learned that she was pregnant but only a few people know about her being pregnant. On Thursday the 21st of October, Chelsea is going to reach out to Sharon Watts for advice regarding her pregnancy.

In new pictures released from the EastEnders soap opera, Chelsea talks to Sharon Watts (Letitia Dean) about how she decided to keep and raise her child by herself without the help of Gray. Chelsea recently told Gray Atkins (Toby-Alexander Smith) about her pregnancy and that she did not want him involved in her child’s life. When talking to Whitney Dean (Shona McGarty), she told her that she does not want Gray in her baby’s life and warned her about Gray having a temper.

On the EastEnders episode that will air Thursday, Chelsea will stop by the gym in search of a single mom, Sharon Watts. Sharon found herself becoming a single mom after having a fling with Keanu Taylor. She would eventually fall pregnant which would lead to the violent showdown between Keanu and Phil. The fight between the two would lead to Keanu leaving.

Sharon’s decision to keep the baby and to not give him up would lead to the end of her relationship with Phil. EastEnders spoilers show Sharon has since has opened a business while taking care of her son. She also connected with the brother she never knew, Zack Hudson (James Farrar).

Chelsea wants to ask Sharon about the practicalities of raising a baby as a single parent. This conversation between Sharon and Chelsea will lead her to wonder if she will be able to support her child on her own without any help. Chelsea will go on to decide if she wants to raise her child completely on her own.

Chelsea does not feel comfortable with co-parenting with Gray because of his violent tendencies on EastEnders. However, she does not know how far his violent outburst have gotten. What will be the decision that Chelsea will make? Will she decide to let Gray into her baby’s life?