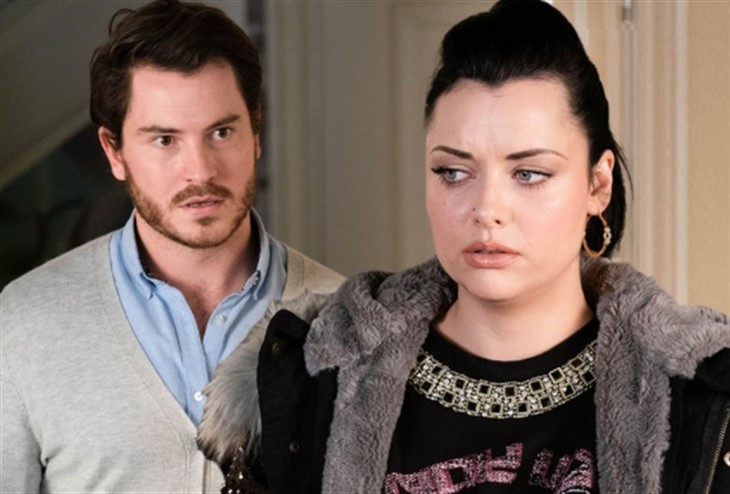 Eastenders spoilers reveal that in Walford Gray Atkins (Toby-Alexander Smith) has tried to manipulate and control Whitney Dean (Shona McGarty). He has plans to make Whitney his next victim. However, she ends up blindsiding him by making it publicly known that she’s in a relationship with Kush Kazemi (Davood Ghadami). This could have tragic consequences for Whitney.

Eastenders spoilers reveal that Gray has plans for Whitney. Despite her not feeling anything romantic for him, Gray has certain expectations. When she considered dating again, he strongly advised her against it. He is already lying, manipulating, and controlling Whitney to a certain extent. The long that she is around him, the worse it will get until one day, she ends up just like Chantelle Atkins (Jessica Plummer).

Eastenders spoilers reveal that Gray has already lashed out and screamed at Whitney a few times. He always apologizes and Whitney tells herself that he’s still grieving or stressed. She does know that he interfered in her dating other people, so her romance with Kush is kept private.

Gray invites Whitney out for a drink with the intention of apologizing to her for exploding earlier. He has actually been doing that quite a bit with Whitney. Fans were afraid that she might be falling under his spell, as well as his control. However, the storyline is going in an unexpected direction. The invitation for a drink is one more way for Gray to draw Whitney closer to him and it will almost be like a date. However, he ends up blindsided when Whitney shows up with Kush. When the two go public with their relationship, it will infuriate Gray. Even though Gray and Whitney don’t have a romantic relationship, he will still consider it a betrayal.

It is a given that Gray will end up killing at least one more time before he is exposed. He was responsible for Chantelle’s death. When Tina Carter (Louisa Bradshaw-White) found out the truth, Gray murdered her to keep his secret hidden. Fans were promised that there will be justice and Gray gets what he deserves in 2021. It’s just a matter of when it will happen and how it all unfolds. Until that happens, though, Whitney is in grave danger. Can she be saved before it’s too late?

What do you think is going to happen when Gray Atkins finds out about Kush Kazemi and Whitney Dean’s romance? Will going public lead to a tragic end? Or will it be Gray that ends up paying the price? We will have to keep watching the BBC soap to find out how this story develops.