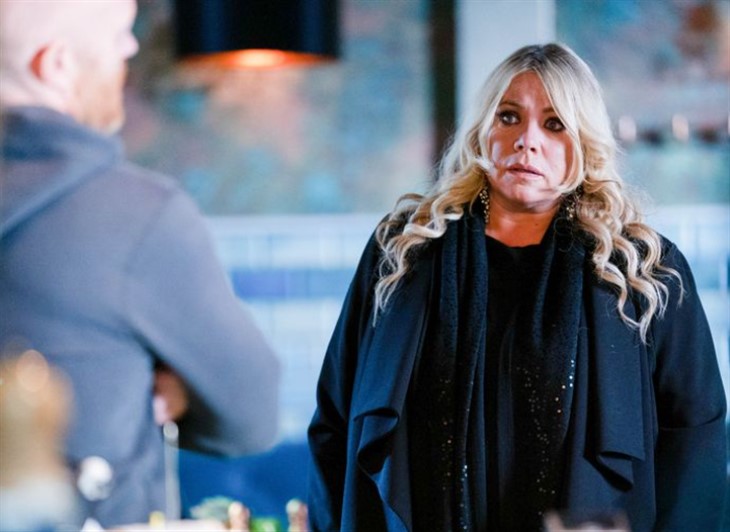 Eastenders spoilers reveal that in Walford Sharon Beale (Letitia Dean) will find herself cornered when Max Branning (Jake Wood) accuses her of murder in front of everyone at The Vic. Ian Beale’s (Adam Woodyatt) family demands answers about his disappearance. Then, they end up asking Phil Mitchell (Steve McFadden) for help, not knowing he was plotting with his ex-wife.

For the past year, Ian has schemed, plotted, manipulated, threatened and blackmailed in order to keep his secret from Sharon. Fans predicted that she discovered Denny Rickman’s (Bleu Landau) tragic death was caused by Ian. That turned out to be deadly accurate. Sharon and Phil worked together to poison and eventually kill Ian for the boy’s death. Now ian has disappeared and Max is going after Sharon, but he doesn’t know that Ian is still alive. Of course, with Ian nowhere to be found, she can’t prove that her husband isn’t dead. A source told Inside Soap magazine,

“It’s a heart-stopping moment for Sharon — she’s cornered! Max is gunning for her, and he won’t stop until Ian is found. Of course, he doesn’t know the full story, including the fact that Ian is still alive. However, without Ian by her side, Sharon arouses suspicion, and the Beales will want answers.”

Eastenders spoilers reveal that Inside Soap magazine confirms that Max will be going after Sharon. While in The Vic, Sharon and Kathy Beale (Gillian Taylforth) get into it. Finally, Max publicly announces she’s the one who attacked Ian. She ends up cornered and the situation turns into an even bigger nightmare. Ian’s family wants answers and when Max interrogates Sharon, she gets defensive and then things start to get really nasty.

Desperate for answers, the Beale family turns to Phil and asks for his help. Of course, they have no idea that Phil has been plotting with Sharon this whole time and gave her the pills. While Max overheard Sharon postponing Ian’s medical appointment to have tests done, Phil has kept his distance in the shadows. When the Beales turn to him for help, he says no.

It is teased that to the outside looking in, it appears that Sharon has done something sinister to Ian. They have no idea that he’s responsible for Denny’s death and covered it up for months. She did make him pay by leaving him a broken and defeated man. But with all these questions and suspicions, along with Ian suddenly vanishing without a trace, Sharon looks guilty of murder. How is she going to deal with this situation and how far will Ian’s loved ones go to find out the truth? Could Sharon end up in a deep hole that she can’t climb out of? We will have to keep watching the soap to see what happens next

The Young And The Restless (Y&R) Spoilers: Can Sally Survive Her Past? Summer’s Got The Goods & Wants A War