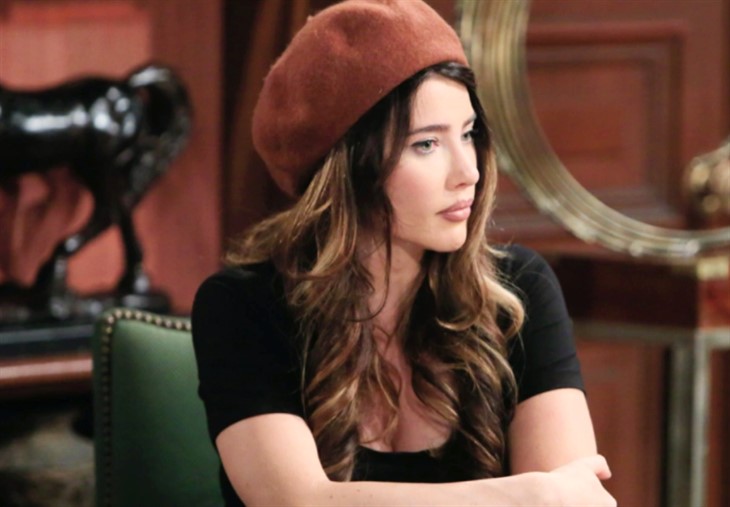 The Bold and the Beautiful (B&B) spoilers document that in Los Angeles Steffy Forrester (Jacqueline MacInnes Wood) knows that she has to reduce the stress in her life. So she purposely gather a trio of linked characters and set baby boundaries.

Steffy desperately wants paternity test results. But her doctor told her that it is too early in her pregnancy. It appears that means a number of weeks will pass until the test can be taken.

So, John Finnegan (Tanner Novlan), Liam Spencer (Scott Clifton), and Hope Spencer (Annika Noelle) have to be patient. Steffy also told them that she’s apologized to everyone enough and now has to protect the baby. So, the drama between everyone needs to end.

Steffy was projecting her maternal instincts. The baby is no theory and the emotions surrounding the boy or girl’s father have been the driving focus since the cliff house reveal happened.

Liam and Finn need to call a truce and Hope needs to back off the blame game. Steffy isn’t saying that the men in question or her rival don’t have legitimate beefs. Wood’s character simply needs to settle herself, which requires a commitment on behalf of all who are directly involved.

Liam initially believed that Finn was behaving unethically. He was Steffy’s doctor, but was also interested in her on a personal level. Liam accused Finn of not being able to make clear-headed decisions while Steffy was recovering from surgery following the motorcycle accident, which led to the start of a pain-killer addiction.

To his credit, Finn acknowledged that Liam was generally right. While Novlan’s character never acted in an intentionally unethical manner, he did need to step away from being her doctor. Doing so led to Sinn forming.

Steffy has clearly stated that she wants Finn to be the father. However, Liam’s reveal would not change her love for the baby in any way.

The Bold And The Beautiful Spoilers – Hope Spencer Stuck In Purgatory

Hope can’t truly make any decisions about Lope until Liam learns the news. Her emotions have been subsiding, as Noelle’s character also calls for the passage of time.

In this part of the storyline, Hope is likely looking at more than a small number of weeks before she determines her answer. First the paternity tell and then she’ll decide if her love for Liam will overcome all that has happened.