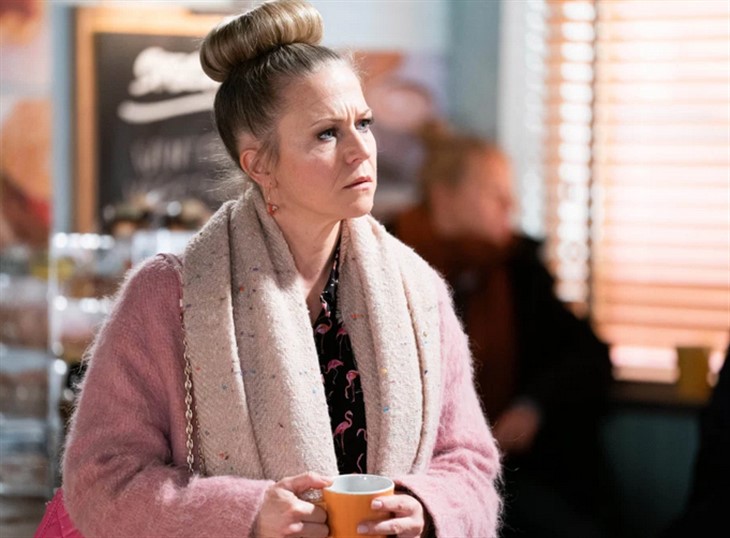 EastEnders Spoilers hint that Linda Carter (Kellie Bright) may face some danger in upcoming episodes as the Queen Vic is targeted. In upcoming episodes, many storylines will soon clash as Linda finds herself in trouble. This will start with Whitney’s storyline that involves her singing career. As Whitney Dean (Shona McGarty) has a charity music gig, she becomes nervous about the event. However, later on she is convinced to perform and not quit on the performance by Rocky. She eventually builds up the courage to go on stage and perform in front of everyone. She receives a huge applause from the audience but things take a darker turn later on.

This will tie in Linda’s pregnancy storyline as two guys who are attending the charity music gig begin to eye the proceedings. This will include the charity bucket that is slowly filling up throughout the duration of the concert. When the concert ends, Mick leaves Linda to close up the Vic as he leaves with Whitney and others to go and celebrate the turnout of the event. As Linda goes to close up the shop, the two men from earlier show up and stop Linda from being able to close up.

The last storyline that will soon be colliding with the others is the Nancy Carter (Maddy Hill) and Zack Hudson (James Farrar) storyline. Nancy and Zack are keeping their relationship a secret from everyone else. At the time of the robbery, the two are upstairs when they hear the commotion. When Zack hears that something is going on downstairs, he decides to go see what is going on.

It seems that Zack may be the one who helps Linda in this dangerous situation. However, it seems that this will mean that he and Nancy are going to have to be honest about them seeing each other. It will be interesting to see each of these storylines will intertwine with each other. Also with Zack having to make the decision on how to go about helping Linda in upcoming episodes, will he be able to help her? How might this storyline affect Linda and her baby?