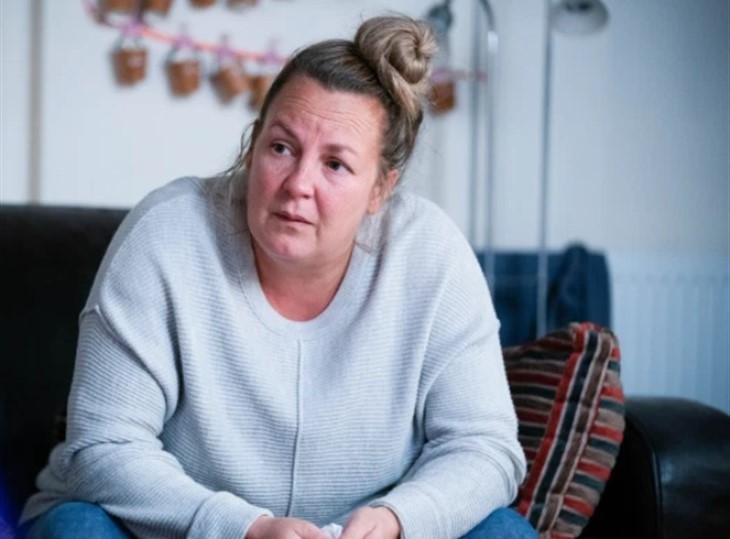 Eastenders spoilers reveal that in Walford Karen Taylor will flirt with serial killer Lucas Johnson (Don Gilet). The two will go on a date, but Karen doesn’t know his real identity. He uses his dead son’s name. Fans are really surprised by this deadly romance twist. Actress Lorraine Stanley explained how Chantelle Atkins (Jessica Plummer) death is linked to this story.

Karen Taylor’s Bored With Her Life
Eastenders spoilers reveal that Karen is getting a bit bored with her life. Doing the same things day in and day out can get tiring. Going to work, coming home, cooking, cleaning, then do it all over again. This is probably why she was so eager to take care of Chantelle and Gray Atkins’ (Toby-Alexander Smith) children. Not only did she want to bond with her grandkids, do her duty after Chantelle’s death, and help out Gray, but it gave her something to look forward to.

Eastenders spoilers reveal that it partly has to do with Chantelle. The actress talked to Digital Spy and explained, “The loss of [her daughter] Chantelle and her grief with it all is overwhelming so she wants something to distract her and make her feel happy.”

In addition to being bored and missing Chantelle, Karen also wants some fun and excitement. When Lucas happens to walk in and he is good-looking and kind of mysterious, Karen takes a chance and starts flirting with him. She is thrown when they actually have a date. However, she doesn’t know that he is Lucas. When asking his name, the serial killer gives Karen his dead son’s name, Jordan.

Eastenders Spoilers – What She Doesn’t Know Can Hurt Her

Eastenders spoilers reveal that Lucas has been battling his urge to kill. At the same time, he is trying to help Chelsea Fox (Zaarah Abrahams). Despite him being a former serial killer, kidnapper, and professional intimidator, it does hurt him that Chelsea has so much hatred toward him. He does seem genuine about trying to help Chelsea. However, that doesn’t mean he’s a good guy. A lot of the evilest and wicked villains have some sort of heart for their own families.

So, what Karen doesn’t know can hurt her, especially if Lucas is giving her a fake name. Of course, this is a soap and that means nearly everyone gets redeemed and there are unexpected twists. So, if Lucas doesn’t plan to kill her, the fake name might be so he’s not judged by Karen like he is everyone else. At least, we can picture him saying that when confronted… and he will be confronted.

Karen sneaks a picture of Lucas and sends it to Mitch Baker (Roger Griffiths and Bernie Taylor (Clair Norris). We also know that Stanley isn’t being killed off the soap, so she’s going to survive somehow.

Be sure to catch up on everything happening with the soap news right now. Come back often for Eastenders spoilers, news, and updates.