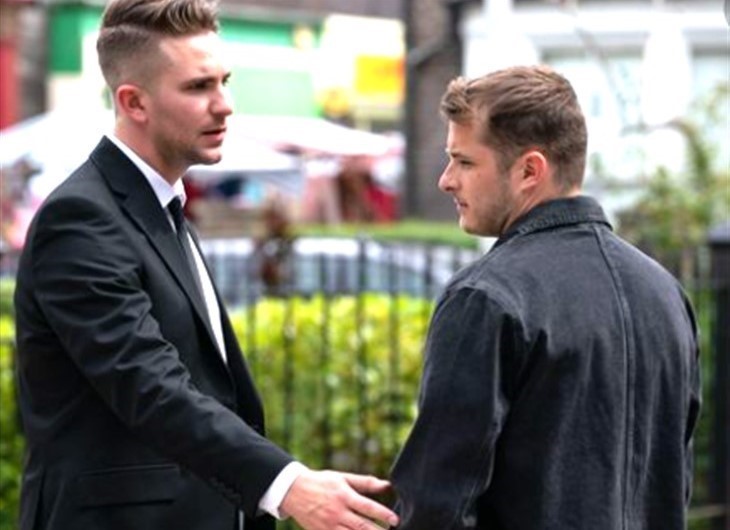 Eastenders spoilers reveal that in Walford Ben Mitchell (Max Bowden) proposes to Callum Highway. Even though the two have been together for quite a while and are in love, they have gone through troubled waters. Ben is positive that his marriage proposal will be accepted. However, Callum refuses to marry him. Keep reading to find out why he says no to tying the knot.

It is no secret that a marriage proposal was going to be coming. An episode not too long ago showed Ben beaming proudly at the man he loved and declaring that he was going to marry him one day. It seems that Ben’s proposal will come sooner rather than later.

What sets it off is an incident at Lexi Pearce’s (Isabella Brown) school. Ben asks Callum to pick her up but the school won’t allow it because his name isn’t on the approved list. Ben thinks he can easily fix this problem by asking Lola Pearce (Danielle Harold) to add him, but she refuses until he is officially a member of the Mitchell family.

Eastenders spoilers from Inside Soap magazine reveal that Ben decides to fix the problem with the school his own way. By marrying Callum immediately and making him an official Mitchell. He suggests that they go down to the register office immediately. However, he gets a response that confuses him.

It is confirmed that Callum refuses to marry his partner. It’s not a matter of love, the reason for the rejection is a combination of a few different things. For one thing, nobody — including Callum — is impressed by Ben’s proposal. He put no planning or thought into it. Callum is a serious person and he wants to see that Ben is serious about it, too. Callum also believes that the only reason for the proposal is because being married to him would make Ben’s life easier. He just doesn’t think that being able to pick up Lexi from school is a good reason to get married.

Eastenders spoilers reveal that Ben gets some advice and for his second proposal, he pulls out all the stops. He is confident that Callum will be thunderstruck by what he has planned and won’t be able to say no. However, “Ballum” still might end up not walking down the aisle. Callum is consumed with doubts about crossing the Mitchell family and this could actually be the real reason he says no.

We have seen “Ballum” go through a lot of rocky times that fans weren’t sure the couple could overcome. Even though they made it through everything else, can they get over this new obstacle too? Or will we be seeing the end of Ben and Callum’s relationship?