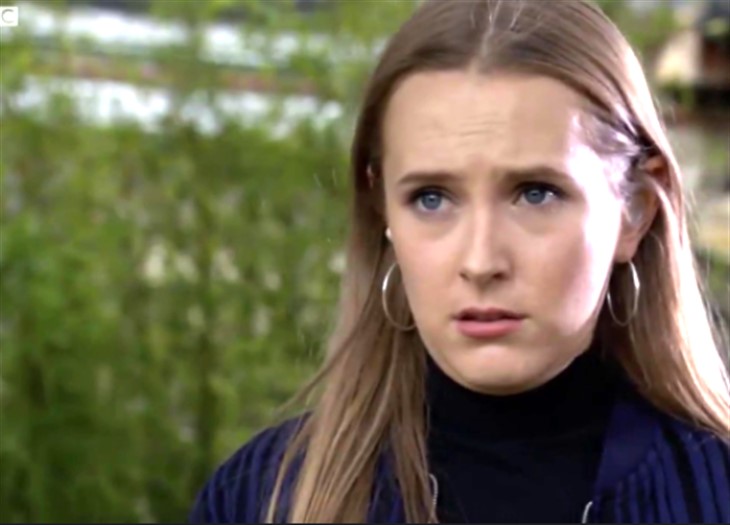 Eastenders spoilers reveal that next week in Walford, Frankie Lewis (Rose Ayling-Ellis) will get arrested after she brutally beats a man. It’s all connected to the abuse aftermath and her feeling rejected by both the Carters and her mother, Katy Lewis (Simone Lahbib). Frankie will have massive struggles as we head into 2021.

Eastenders spoilers reveal that Frankie will come back home, which has Katy feeling tense. The pedophile doesn’t have much empathy, even for her own daughter. Frankie knows the truth about her mother now, which means she is a threat to Katy. So, she offers her a “big opportunity.” However, it just makes the young woman suspicious.

Lahbib told Digital Spy, “When Frankie becomes aware and starts to understand who and what her mum is, she is now a danger to Katy. With Mick [Carter, Danny Dyer] she couldn’t care less if he lives or dies, but it’s different with her daughter so she comes up with the next best thing. She hopes her plan will eliminate Frankie as a liability to Katy.”

Frankie decides to go look for Mick and heads to his place. However, he isn’t there so she deals with Linda Carter (Kellie Bright). She suggests Frankie not wait around and shares her number with the young woman. Linda’s intentions are good — she just doesn’t want to pile anything more on Mick — but it leaves Frankie leaving rejected.

Feeling alone and rejected, Frankie goes to the Prince Albert and starts to get drunk. Ben Mitchell (Max Bowden) and Callum Highway (Tony Clay) are there and can see she’s not in good shape. Unfortunately, they couldn’t predict what would happen next.

Frankie is emotional and not in a good state of mind. While drunk, she brutally beats a man at the bar. The police are called and they place Frankie under arrest. Previously, producer Jon Sen explained that viewers should expect to see Frankie struggle in the aftermath of the abuse. What is going to happen to Frankie now and is there a healthier way for her to cope?

When Lahbib was asked whether Katy understands what kind of effect this is having on Frankie, the actress replied, “I think Katy finds it very difficult to think about anyone else other than herself. Her empathy is very limited, if there at all, so how Frankie’s feeling and the fact that she’s struggling isn’t really on Katy’s radar, as awful as that sounds. She would only become aware of it if it becomes something that might expose her.”

What do you think is going to happen next with Katy Lewis, Frankie Lewis and Mick Carter? How are they going to move forward with their lives and can someone step in and help Frankie before she destroys herself? We will have to keep watching the soap to see what happens with this storyline.