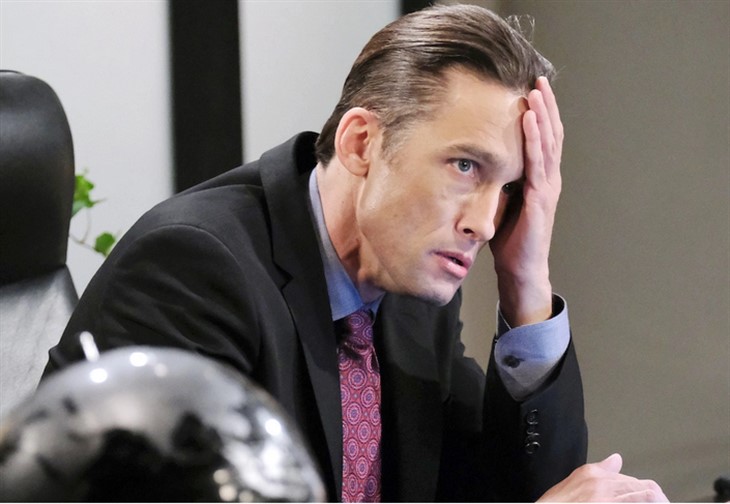 Days of Our Lives (DOOL) spoilers for Tuesday, December 7, 2021, reveal Chloe growing more and more suspicious of Brady as she tries to figure out what exactly happened to him.

Days Of Our Lives Spoilers – What Happened To Philip Kiriakis?

Philip (Jay Kenneth Johnson) spent months acting like he was out of his mind and it just got worse and worse. Philip has always had a jealous streak, but this one has been over the top and more than a little bit suspicious. Now, Philip has disappeared, Brady Black (Eric Martsolf) is bloody and in the hospital, Philip’s phone was found with Brady’s things, and Philip’s blood type was found on Brady’s body. Uh-oh.

On Tuesday, more evidence appears and it doesn’t make Brady look good at all. Shawn Douglas Brady (Brandon Beemer) and Chloe (Nadia Bjorlin) are determined to find the truth, but Chloe is afraid of what she might find out.

While his son is missing, Victor (John Aniston) is completely unaware because he is still trying to hear out Gabi Hernandez (Camila Banus) and Jake DiMera (Brandon Barash). He thought they were both nothing but a joke when they came to him with a business proposition but now what they propose sounds interesting to him. Will Victor make them very rich, indeed?

Roman Brady (Josh Taylor) and Kate Roberts (Lauren Koslow) are back together again and their son Rex Brady (Kyle Lowder) is back in town and is surprised to see them dancing together. He is also quite pleased but may get another shock when Xander Kiriakis (Paul Telfer) gets a hold of him and demands to know what happened to Sarah Horton (Linsey Godfrey). Rex will certainly want to know why he is asking this since he hasn’t seen Sarah since winter and has no clue where she is.

Chad DiMera (Billy Flynn) has just absolutely had it with EJ DiMera (Daniel Feuerriegel) and the two men get on each other’s last nerve. Chad decides to lament his EJ troubles to Abigail (Marci Miller), but she is not as sympathetic as he wants. After all, she did have an affair with his brother and knows he is not all bad…. Stay tuned to Days of Our Lives weekdays to see how these stories play out.