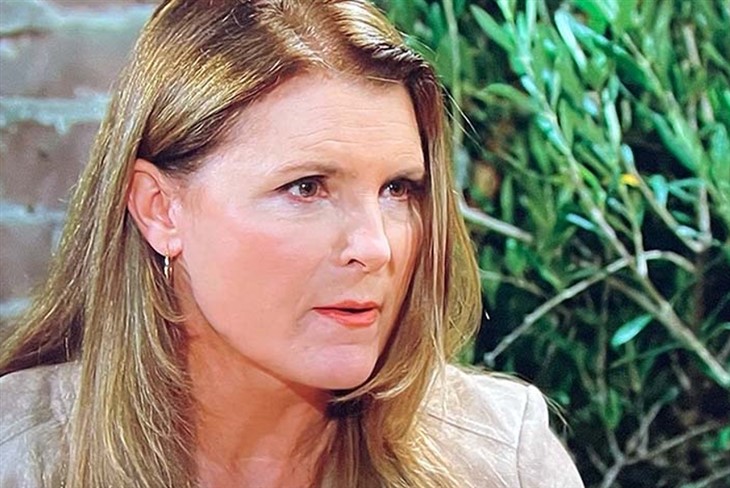 The Bold and the Beautiful (B&B) spoilers for Tuesday, December 7, 2021, reveal Sheila is incredulous that Deacon seems to be getting everything he wants and she is still in the doghouse with her son.

The Bold And The Beautiful Spoilers – How Can Deacon Sharpe Get So Far?

Sheila (Kimberlin Brown) thought Deacon’s (Sean Kanan) plan of playing the good guy and coming between Ridge (Thorsten Kaye) and Brooke Forrester (Katherine Kelly Lang) would never work. In fact, she laughed right in his face because in her mind, Brooke would always side with Ridge at this point in their lives.

But it’s working and Deacon is making more inroads every day. Hope Logan Spencer (Annika Noelle) and Brooke are taking his side against an enraged Ridge more and more and he has Hope back in his life, which was exactly what he wanted.

Sheila can’t believe that Deacon has accomplished this and wonders where she is going wrong with Finn (Tanner Novlan). Perhaps NOT being a sociopathic killer who shot Finn’s wife’s mother would have worked in her favor, but you can’t have everything. Now, Sheila realizes she must up her game plan, which could be a very dangerous thing.

B&B Spoilers – Ridge Forrester Did WHAT???

Brooke could hardly believe her ears when Ridge told her that he essentially evicted her daughter and her family. Yes, he told Hope that she, Liam (Scott Clifton), Douglas (Henry Joseph Samiri), and Beth couldn’t live in their little cottage on his property anymore as long as Deacon would be there.

This could be a final straw for Brooke this time around. Ridge is acting completely irrationally and she is absolutely sick of it. They always seem to be arguing about their respective children. Ridge is now angry at Hope when Brooke is usually enraged at Thomas (Matthew Atkinson). Maybe one of them should care about Little Douglas and where is going to live since they are both his grandparents.

When Brooke lays into him for his latest stunt, Ridge storms off in a huff and ends up with his kids, Thomas and Steffy Forrester (Jacqueline MacInnes Wood). They have never been very fond of Brooke so they reminisce about when they were kids and Phoebe was still alive…and he was still married to Taylor…. Stay tuned to The Bold and the Beautiful weekdays to see how this story plays out.