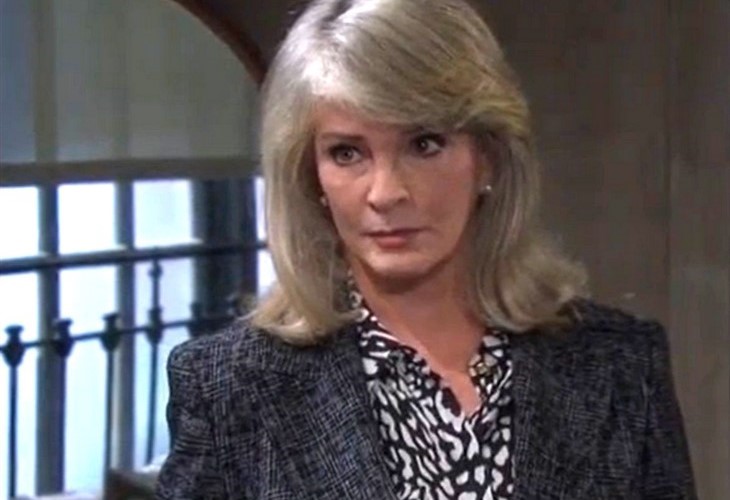 Days of Our Lives (DOOL) spoilers for Thursday, December 2, 2021, reveal MarDevil trying to pull the wool over Ben and Ciara’s eyes while John frantically searches for his possessed wife.

Days Of Our Lives Spoilers – Ciara Brady Is Suspicious

Ben Weston (Robert Scott Wilson) might feel that Marlena Evans (Deidre Hall) can do no wrong and that she is telling the absolute truth when she says that John Black (Drake Hogestyn)has been abusing her. And now they are on the run. However, a pregnant Ciara (Victoria Konefal) has an uneasy feeling about this. Marlena isn’t acting like Marlena at all and she is beginning to worry they made a massive mistake.

Meanwhile, John is desperate to find MarDevil, knowing the enormous damage the devil can do. When he learns what happened at Abe Carver (James Reynolds) and Paulina Price’s (Jackee Harry) wedding and how Marlena was acting, he tells Paulina that wasn’t really Marlena at all. Things make sense now, especially how Big Mama Olivia Price (Marla Gibbs) knew something was just plain wrong with the woman officiating the wedding.

Abe Carver and Lani Price (Sal Stowers) still feel like father and daughter although they are not. Why Tamara Price (Marilyn McCoo) chose Abe as Lani’s fake dad is beyond us, but the two truly bonded over the last five years and now that relationship was taken away from them

But does it have to end? They may not be biologically related, but they do love one another as a parent and child would. After they talk things through on Thursday, is that the conclusion they come to?

Days Of Our Lives Spoilers – Philip Kiriakis Is Losing It

Philip Kiriakis (Jay Kenneth Johnson) has seemed like a loose cannon ever since he returned to Salem late last year. He has been focused on winning Chloe Lane (Nadia Bjorlin) and she has told him they are officially together, but he still thinks she wants Brady Black (Eric Martsolf).

After overheating them talk about sex on a conference room table, he assumed they were talking about them and not Rafe Hernandez (Galen Gering) and Nicole Walker (Arianne Zucker). Now, Philip is out for revenge and it’s not going to be pretty — especially for Philip. Stay tuned to Days of Our Lives weekdays to see how these stories play out.