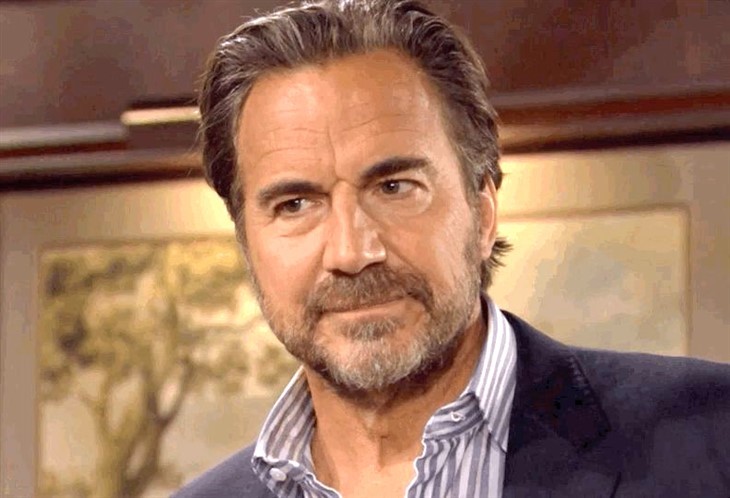 The Bold and the Beautiful (B&B) spoilers for Thursday, December 2, 2021, reveal Ridge freaking out that he may have pushed things way too far with Brooke.

The Bold And The Beautiful Spoilers – Ridge Forrester Needs To Make Amends — FAST!

Brooke Logan Forrester (Katherine Kelly Lang) has had it and she let everyone know this week. She is sick of the bickering, sick of men giving orders, sick of not being heard, and sick of everyone throwing verbal and physical punches at one another. She is especially sick of Ridge (Thorsten Kaye) and his holier than thou attitude when he is not a holier than thou man.

Hearing Brooke’s outburst wakes Ridge up to the fact that he has been doing serious damage to their marriage just over Deacon Sharpe (Sean Kanan). He realizes he has to make things up to Brooke and starts pulling out all the romantic stops? But will it work or is Brooke way too hurt and angry? Brooke and Ridge have been through tough times before and this is certainly not the worst of it. Now, if Brooke falls for Deacon’s charms, that would be a whole other issue. After all, the last time they broke up was because she kissed Dollar Bill Spencer (Don Diamont).

Every time Finn (Tanner Novlan) thinks he has gotten Sheila Carter (Kimberlin Brown) out of his life to obey Steffy Forrester’s wishes, she somehow manages to show up in his life again. Sometimes it seems coincidental, and sometimes it’s blatantly on purpose — like on Thursday.

Sheila bites the bullet and shows up at the hospital to talk to her son. Finn can’t believe she would visit him at his place of work and distract him like this, but he still can’t shake that need to get to know this woman who gave birth to him and then gave him up.

However, he knows that his relationship with Steffy (Jacqueline MacInnes Wood) would be over if he pursued a relationship with his mother. But maybe the reason Steffy would dump him in a second is something he needs to learn the hard way. Sheila truly is dangerous and crazy and always has been. Steffy is not wrong. Stay tuned to The Bold and the Beautiful weekdays to see how this story plays out.