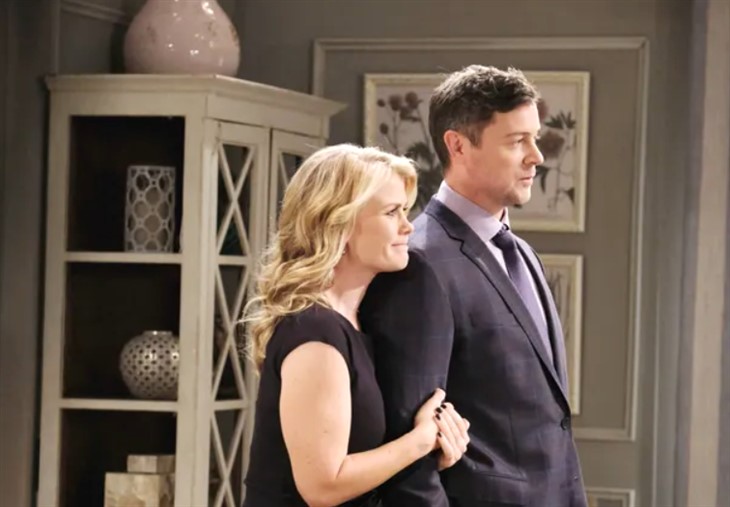 Days of Our Lives viewers will recall when Days of Our Lives left off before the Tokyo Olympics, EJ DiMera (Dan Feurreriegel) had just found out about Sami’s unfaithfulness. Nicole Brady (Arianne Zucker) had brought Kristen DiMera’s (Stacy Haiduk) letter that Sami had thought she’d burned to EJ. Unbeknownst to Sami, Lucas Horton (Bryan Datillo) had saw her and rescued the letter, partially singed but still readable. Nicole got it from Phliip Kiriakis (Jay Kenneth Johnson) who retrieved it from the trashcan behind the bar at Brady’s Pub after Lucas showed it to him and then trashed it. As the episode concluded, EJ, calm, but more like the calm before the storm, faced Sami in the living room of the DiMera Mansion.

Days of Our Lives viewers know that EJ was furious when he first read the letter, and even though Kristen didn’t name Sami’s lover, it won’t take much for him to figure out it’s Lucas. EJ first gives Sami a chance to confess on her own and then confronts her over it. But Days of Our Lives viewers know Sami, she is a very convenient liar. She flat out denies that she slept with Lucas at all, and he doesn’t buy it. Finally she admits it was only one time after he assures her he will understand. EJ knows it was more than one time, and he confronts her again, asking if she’s sure it was only one time?

Days of Our Lives viewers can imagine Sami’s shock when EJ pulls out the letter she thought she had burnt! Things really explode when all her excuses and lies fall apart and she is forced to tell EJ the unvarnished truth! Their argument can be heard all the way from the DiMera Mansion to Days of Our Lives viewers’ ears, and likely all over Salem! Of course, after everything blows up in her face, Sami heads straight over to blame Nicole for the whole thing, and finds Rafe Hernandez (Galen Gering) with her. The presence of Rafe colors the confrontation with considerably more civility than there would have been if it had been only Nicole and Sami there! Nicole surprisingly is able to get through to Sami that the only reason Sami’s world was blown up is because Sami blew up Nicole’s world!

Sami’s really burning some bridges in front of the world and Days of Our Lives viewers when she finds Lucas and tears into him! She figures out that he had to have been the rescuer of the letter and that Philip got the letter from him, because Lucas wanted her to leave EJ and come back to him! She figures the two conspired to break up her and EJ! Sami feels betrayed, and as Days of Our Lives viewers know, there is nothing that makes Sami madder than being betrayed! She still loves Lucas deep down, and she knows he still loves her, but she chose EJ! Lucas confirms that he’s glad EJ and Sami blew up because now they can be together but she says no and burns her bridge with Lucas!

Days of Our Lives viewers won’t be at all surprised when EJ evicts Sami and kicks her out of the DiMera mansion! She immediately heads out back to Rafe’s house to ask Gabi Hernandez (Camila Banus) to help her stay in the DiMera mansion since she owns it. Of course, as Days of Our Lives viewers will recall, Gabi couldn’t even keep herself from being evicted, so she may not have been much help. Sami, still thinking she can sweet and sexy talk EJ into taking her back, tells him she’ll be back and he hasn’t heard of the last of her! But Sami is kidnapped by a mysterious someone before she even reaches Rafe’s house!