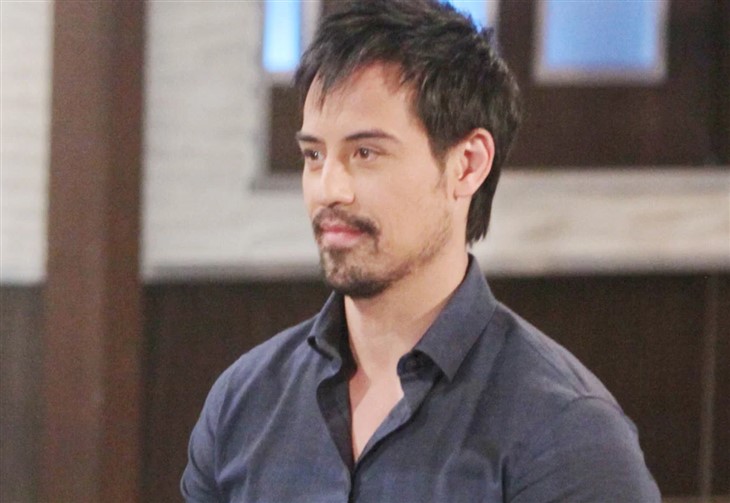 After going through Harmony’s (Inga Cardranel) things with Alexis (Nancy Lee Grahn) and discovering she was sending letters to Spencer (Nichola Chavez) in France on Ryan’s (Jon Lindstrom) behalf, Nikolas (Marcus Coloma) is enraged and it hits him that Spencer and Ryan could have been in cahoots this whole time. After all, it can’t be a coincidence that Spencer returned to Wyndemere as soon as Ava was gone. Nikolas wonders if his son could really be so manipulative. Little does anyone know this kid rigged an entire American (local) election, which doesn’t even happen in real life.

Finding the letter prompts Nikolas to confront Spencer with what he knows and this freaks the teen out for a little bit, but he soon realizes he will be able to talk his way out of this and actually manages to do so. Nikolas wants to have a relationship with Spencer so much he wants to believe everything his son tells him, even if there are red flags waving all around.

Spencer pretends to be offended that his father would think such things of him and guilts Nikolas into apologizing for his accusations. Little does Nik know, he was right about everything.

GF Spoilers – Is Spencer Cassadine In More Trouble Than He Thinks?

Does Spencer even know what he’s getting himself into working with someone like Ryan? He and the serial killer clearly have more plans up their sleeves and Spencer is anxious to put all those plans into motion. But again, Ryan Chamberlain is a sociopathic serial killer and will kill literally anyone who gets in his way. Spencer is expendable to him and if he crosses the man at all, Spencer will be dead.

Hopefully, someone realizes what Spencer is up to before it’s too late because he’s putting his life at risk. Something tells us Ava Jerome (Maura West) will catch on. She won’t end his life, but she could end his life as he knows it. Perhaps he has underestimated his stepmother. Stay tuned to General Hospital weekdays to see how this story plays out.