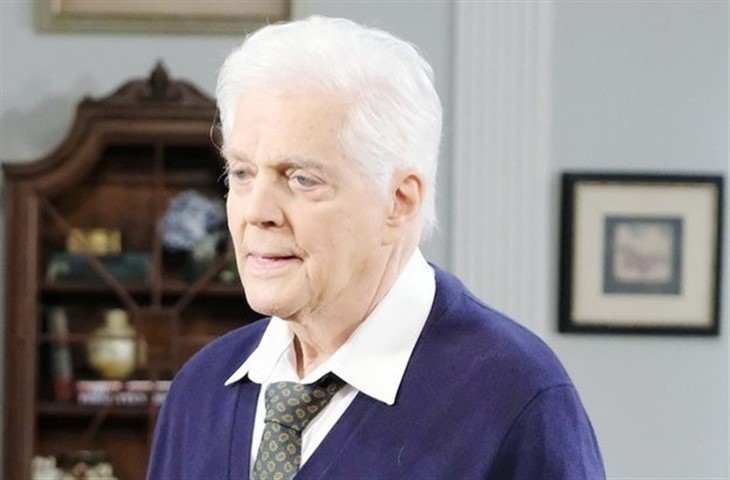 Days of Our Lives spoilers for next week of September 27 reveal that Doug Williams’ (Bill Hayes) condition gets worse. Everyone assumes it’s a form of dementia. However, it is really the devil himself. Once Satan possesses Marlena Evans (Deidre Hall), he will silence Doug. Determined to warn anyone of what’s really happening, Doug struggles to secretly communicate the truth.

DOOL spoilers reveal that on the Friday, September 17 episode, Doug was confirmed to be possessed. When Doug met with Marlena to discuss his memory loss, Doug started to drop clues of what was really going on. However, Doug wasn’t even able to finish his sentence before his body was taken over by the devil.

When Marlena asked Doug about locking Julie Williams (Susan Seaforth Hayes) in the freezer, the devil answered. Marlena didn’t realize it at first until she saw Doug’s eyes change to an eerie yellow glow. Then, she heard the unmistakable voice of the devil. It was the beginning of the repossession story.

Days of Our Lives spoilers reveal that it’s too late to save Marlena from repossession. However, it will be a while before anyone realizes the truth. In the meantime, the devil silences Doug. What appears to Julie, Kayla Johnson (Mary Beth Evans) and others is that Doug is getting worse. Although Kayla said there were no dementia or Alzheimer’s markers in Doug’s brain scan, she also warned that sometimes there are no markers. So, when Doug gets worse, he will probably be misdiagnosed with dementia.

When Doug gets worse, the one part of him that will be affected is his ability to communicate. This prevents him from telling anyone the truth about what happened to him and what’s happening to Marlena. Luckily, there are other ways to communicate than just verbally.

During the week of September 27, Doug struggles to communicate the truth. He will probably try Julie first, but she won’t be able to understand. Plus, she is convinced that it’s dementia and won’t really pay attention to the other clues. That same week, Doug will try to communicate the truth to Eli Grant (Lamon Archey). However, will Eli understand what Doug is trying to say? Or will Doug’s plea fall on deaf ears?

Do you believe that Doug will be able to get a message across even though he is silenced by the devil? Will Eli comprehend what Doug is trying to say, or at least, go check on Marlena and John Black (Drake Hogestyn)? We will have to keep watching the NBC soap to find out what happens next.