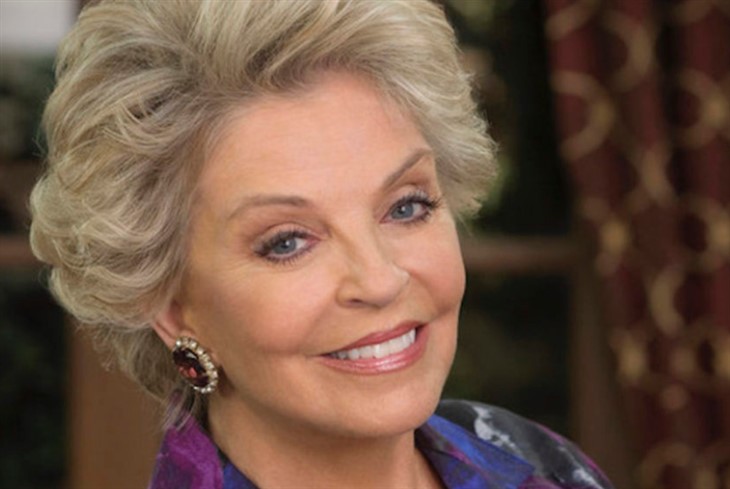 Days Of Our Lives spoilers show that Doug continues to experience memory problems.  And that situation means Julie may face a difficult decision.

But before we start speculating, let’s see what the actress portraying Julie (Susan Seaforth Hayes) says about the problems Doug (Bill Hayes) has evidenced.  Discover what this DOOL star just revealed below.

The DOOL actress told Soap Opera Digest that she knew Julie would face challenges and potentially heartbreak trying to understand what was wrong with her husband Doug.

“I wasn’t told a lot. I was told it was going to be serious, of Doug’s mind going, which is frightening to Julie,” recalled Susan.

Looking at the situation as Doug’s wife, Susan noted that Julie’s world revolves around her husband.  “I believe she’s had the line, and certainly my own line, ‘You are my whole world.’,” pointed out Hayes.

From an acting perspective, though, Susan shared she enjoys the opportunity to show Julie’s depth.  And Bill relishes his role as Doug as well.

“At 96, he’s doing a lot and loving doing it,” revealed the actress.  Rather than constantly reflecting on what’s happened in the past, the plot twist gives Julie and Doug the opportunity move forward.

“I appreciate the nostalgia that we represent, but it’s nice to be representing more than nostalgia and to be involved in the here and now and hopefully the future, as well,” she added.

Rumors that Doug suffers from dementia or Alzheimer’s do account for his memory problems.  But for Julie, “her initial reaction is denial. Denial, denial, denial,” noted Susan.  And at first, Julie reacts by refusing to believe the claims.

“Her initial experience is, “I refuse to believe that that’s happening to him,” which is where you start but not necessarily where you finish,” pointed out the actress.

As to where the story might finish, Susan reflected on what it means to be “an older person married to an older person. You have that fear and that frenzy. You’re not just denying that someone has dementia or may be slipping, what you’re denying is it can’t be over, the love story can’t be over.”

DOOL Spoilers – What Does The Future Hold For Julie Olson And Doug Williams?

But fans don’t need to fear an endless plot of sorrow for Julie and Doug.  At this point in their lives, Hayes added, Julie and Doug “got over the bad side a long time ago and have had a wonderful long line of happiness, and you don’t want to see it end. You can’t believe it could end. It’s not the end that you pictured.”

But Susan offered hope for what might happen with Julie and Doug.  “You have to be quite philosophical to take a breath and say, “Okay, this is what it is and maybe it’s not so bad. Maybe we can handle it,” she added.

And she promised some excitement in the future.  “It’s been really good plotting by the head writer, Ron Carlivati. We’ve had more work than we’ve had in a long time, which has only been enlivening,” added the actress.

What do you think might happen to Julie and Doug? Tweet us your views!  And be sure to check back on our site for all the news about Days Of Our Lives.