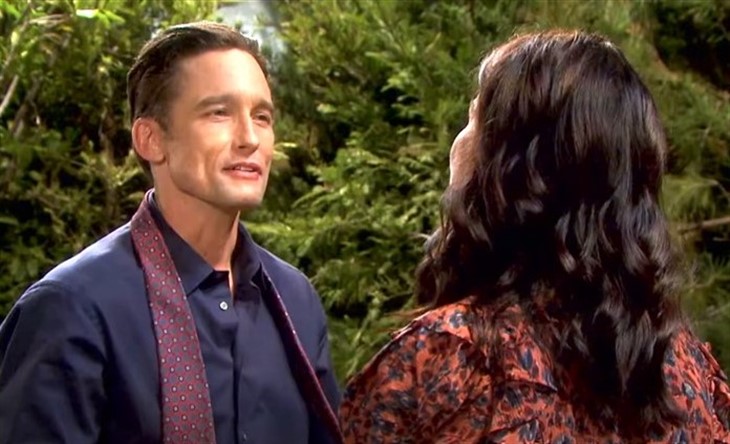 Days of Our Lives (DOOL) spoilers reveal that the fall preview has been released. Fans can expect much more than just Marlena Evans’ (Deidre Hall) possession in Salem. There will be plenty of romance with several couples and Xander Cook (Paul Telfer) talks about rescuing Sarah Horton (Linsey Godfrey). Jake DiMera’s (Brandon Barash) has a secret, “CIN” tries to have a baby and more.

Days Of Our Lives Spoilers – Lots Of Romance

DOOL spoilers reveal that in the fall preview clip, there are so many different pairings. Some couples engaging in romance are well-known to fans while others are new. There is EJ DiMera (Dan Feuerriegel) and Nicole Walker (Arianne Zucker) in one scene. Then, Nicole is seen making out with Rafe Hernandez (Galen Gering) in another scene.

Plus, there is Abe Carver (James Reynolds) and Paulina Price’s (Jackée Harry) wedding. It is teased that there will be drama surrounding the nuptials. We’re not just talking about Paulina’s secret, but Chanel apparently has an issue with Lani Price Grant (Sal Stowers) being the maid of honor.

Then, we have Jake and Gabi Hernandez (Camila Banus). Philip Kiriakis (Jay Kenneth Johnson) has a bombshell for Gabi. It turns out that Jake has been hiding a killer secret. He used to be a hitman for the mob.

Days Of Our Lives Spoilers – ‘CIN’ Baby On The Way?

Days of Our Lives spoilers reveal that Ben Weston (Robert Scott Wilson) is currently uncertain about having a baby. However, he must get some reassurance as the fall preview teases him telling Ciara Brady Weston (Victoria Konefal) that they can try for a baby.

DOOL Spoilers – What Else  To Expect

As for what else to expect this fall, Doug Williams (Bill Hayes) doesn’t have dementia but is possessed by the devil. Then, the torch is handed to Marlena, who ends up possessed again. Philip punches Brady Black (Eric Martsolf) in the face, and there is more tension between EJ and Lucas Horton (Bryan Dattilo).

As for Marlena’s possession, Julie Williams (Susan Seaforth Hayes) asks if she’s okay. We also see John Black (Drake Hogestyn) banging on a door asking if his wife is all right. Meanwhile, Marlena is levitating over her bed. It should definitely be a fall that fans will never forget!