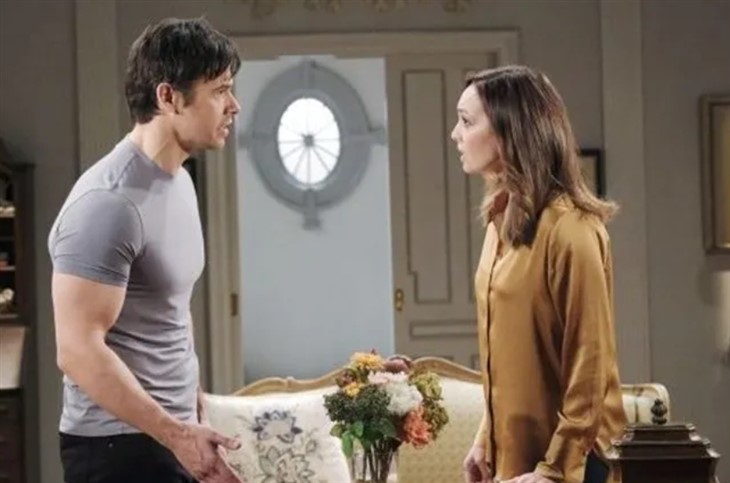 DOOL spoilers reveal that the winter promo confirms that Rex returns to Salem. Rex runs into Xander and Gwen. Of course, there are words exchanged between the two men. Xander mentions Sarah leaving Salem with Rex, but the doctor drops a bombshell. At the last minute, Sarah decided she didn’t want to be with Rex after all and that’s the last time he saw her.

As Xander starts to connect the dots, he realizes that Sarah was acting like someone else. Knowing all about Kristen’s collection of masks, he turns to Susan. The kooky psychic tells Xander that she had nothing to do with Sarah’s disappearance as she was still in jail at the time. Susan will probably remind Xander that Kristen tricked her into trading places. Susan might also tell Xander that she was not the only one that Kristen impersonated.

Days of Our Lives spoilers reveal that Xander goes to the Salem Police Department and interrogates Kristen. Slamming his fists on the table, he tells Kristen that he knows she had something to do with Sarah’s disappearance. Kristen, still looking cool as a cucumber, will gloat about Sarah going missing. There is no way that Kristen is going to tell Xander where he can find Sarah. However, she will just bait him enough to make him fly into a rage.

Kristen will take the focus off of herself and put it on someone else. Kristen will likely tell Xander that Gwen isn’t as loyal as he thinks. Kristen could inform Xander that Gwen knows the truth about Sarah but never told him. Of course, Kristen will probably omit that Gwen was blackmailed and literally just found out. Kristen will make it seem as if Gwen knew about this – and might have even participated in it from the beginning.

We know that Gwen will fulfill her agreement with Kristen and break her out of jail. However, Gwen will lose the last person she had on her side… Xander. Every character is redeemable in soaps. With everything that Gwen has done, it will have to be something major for her to be forgiven. What do you think that redemption story will be and can Xander ever find it in his heart to forgive her?