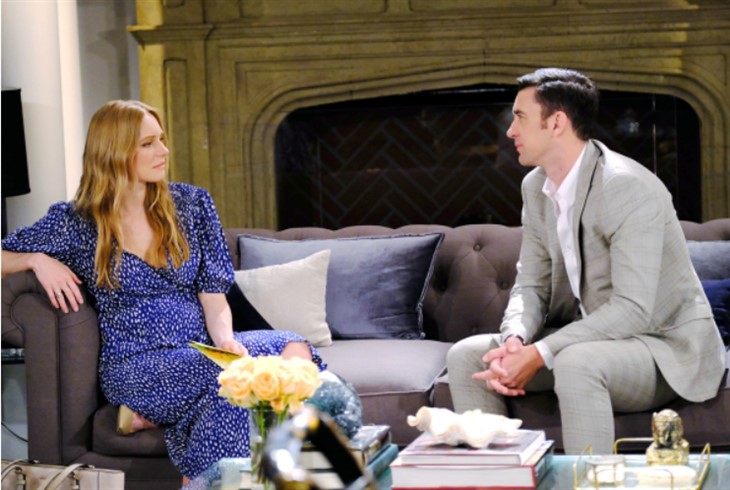 Days of Our Lives spoilers reveal that Abigail DiMera (Marci Miller) seriously contemplates Johnny DiMera’s (Carson Boatman) offer. Chad DiMera (Billy Flynn) is surprised by this but is also fearful of what could happen. Chad decides to make Johnny a deal in order to keep Abigail happy while also protecting her. Keep reading to find out about Chad’s drastic plan.

DOOL spoilers reveal that Johnny told Abigail all about his new movie and made a surprising suggestion. Johnny is no longer making his movie about Sami DiMera’s (Alison Sweeney) life. Instead, it’s only storyline is going to be about Marlena Evans’ (Deidre Hall) demonic possession. The role of Marlena was offered to Abigail, who didn’t immediately give him an answer.

When Chad realizes that Abigail is seriously considering taking the movie role, he is surprised. However, he could also feel a bit of jealousy and fear. Chad could be scared that playing a possessed woman might trigger Abigail’s psychosis. In addition to that, Marlena’s possession and the “Jarlena” affair are linked. So, Chad might worry about who will play John Black (Drake Hogestyn).

Days of Our Lives spoilers reveal that Chad will make Johnny a deal. It is confirmed that Chad and Abigail will re-enact John and Marlena’s affair. So, Chad might want to be the only man that Abigail kisses. However, he will need to make it worth Johnny’s while to cast him as John instead of another man… especially Jake DiMera (Brandon Barash). What Johnny needs the most right now is funds and that is something Chad can provide.

Chad’s intentions are good and he just wants to protect Abigail. However, executive producer Ken Corday told Soap Opera Digest that the movie will cause problems with Chad and Abigail. It’s not a difference of opinion on whether Abigail should take the part or not. It sounds like a “Chabby” divide could be the result of Johnny tempting the devil.

Fans may recall “MarDevil” had a glimmer in the eye once John mentioned Johnny’s movie. So, it is pretty much a given that the devil will use the movie to cause destruction and devastation. Chad might be able to protect Abigail in a lot of ways but he will be powerless against the devil.

What do you think is going to happen when Chad and Abigail re-enact John and Marlena’s love scene? Will Abigail end up being affected by Johnny taunting the devil? We will have to keep watching the NBC soap to find out what happens next.