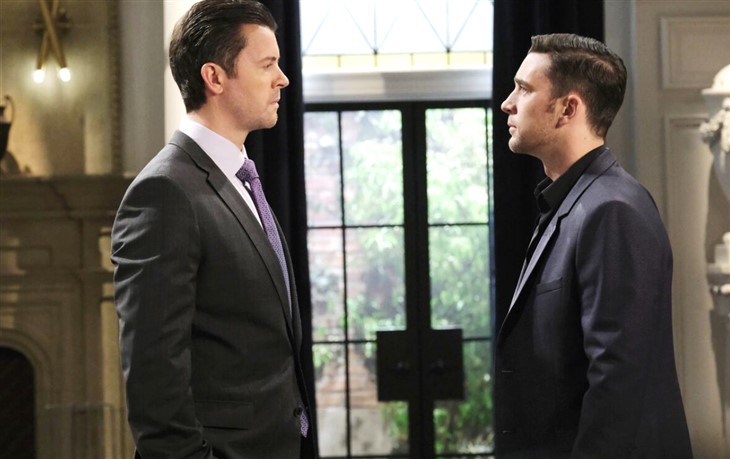 Days of Our Lives (DOOL) spoilers reveal that in Salem Chad DiMera (Billy Flynn) makes a deal with Johnny DiMera (Carson Boatman). Meanwhile, Abigail DiMera (Marci Miller) accepts the movie role offer. However, EJ DiMera (Dan Feuerriegel) will blindside “Chabby.” There could be a price for Chad and Abigail helping Johnny with his movie.

DOOL spoilers reveal that ever since Johnny showed up in Salem, he has been on a mission. That mission is to get investors so he can make a movie. At first, his movie was going to be about Sami DiMera’s (Alison Sweeney) crazy life. However, after learning about Marlena Evans’ (Deidre Hall) possession, he is now making a movie about it.

No matter how determined Johnny is, EJ will not get on board. EJ is determined for Johnny to work at DiMera Enterprises. Not only is he unsupportive of Johnny’s dream, but will do just about anything to thwart it.

Johnny has already decided on who he wants cast in his movie. Allie Horton (Lindsay Arnold) was approached about playing Sami, but she still hasn’t given him an answer. As for who will play Marlena, Johnny thinks Abigail should have the part. Even though Abigail hasn’t given Johnny her decision, she will end up accepting the offer.

Days of Our Lives spoilers reveal that Chad will end up making a deal with Johnny. There aren’t specifics as to what kind of deal Chad comes up with. However, it is confirmed that Chad will play John Black (Drake Hogestyn). In fact, “Chabby” re-enact the “Jarlena” affair. Since Johnny still needs more investors, Chad probably offers to fund the movie as long as he plays opposite Abigail.

EJ is already fuming over Johnny managing to get a few investors. For one, Lucas Horton (Bryan Dattilo) agreed to help fund Johnny’s movie as long as he gets to be Sami’s true love. Roman Brady (Josh Taylor) has also chipped in to help Johnny’s dream come true.

When EJ finds out that Chad and Abigail are supporting Johnny’s endeavor, he could take drastic action. Gabi Hernandez (Camila Banus) no longer owns DiMera mansion. Now it is in EJ’s name and he could use that to try and force “Chabby’ to back out of helping Johnny. However, Johnny is just as crafty and persuasive as his father. It is suggested that Johnny might end up making EJ a deal in order to help “Chabby.” However, could there be unforeseen consequences for everyone?