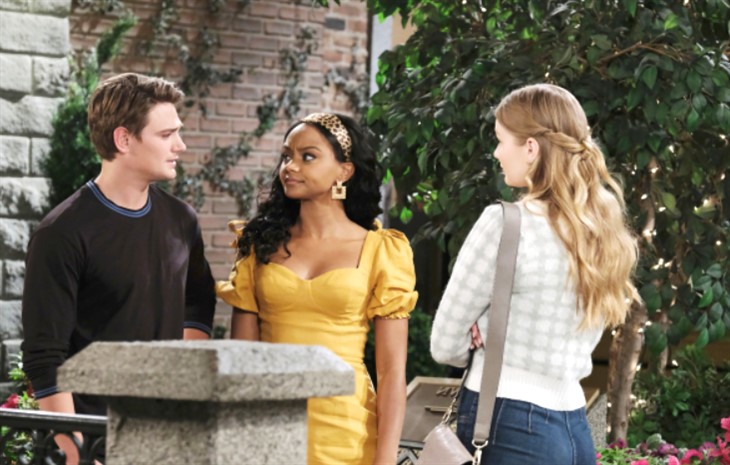 Days of Our Lives Spoilers tease that Johnny DiMera (Carson Boatman) has no idea what he is setting into motion. His desire to make a movie based on his grandmother, Dr. Marlena Evans’ (Deidre Hall) possession would be difficult enough for everyone involved, even if Marlena wasn’t possessed again. But, unbeknownst to most of Salem, she is. MarDevil actually approved of Johnny’s script, which means its likely going to bring even more chaos. Soon Johnny, his twin sister Allie Horton (Lindsay Arnold), and his girlfriend Chanel Dupris (Raven Bowens) are going to get a very tangible sign that the movie is not a good idea.

Days Of Our Lives Spoilers – A Spirit Board Will Speak Nothing But The Truth.

The three of them will soon consult a spirit board. Johnny won’t likely take it seriously, at least not at first, but Chanel surely will. She has already told Johnny the subject matter is dangerous, but he scoffed. Even with her reservations about the movie, Chanel has agreed to play Celest Perrault (Tanya Boyd). Celeste was a psychic who sensed evil in Salem before anyone else. Look for Chanel to take on that same role as the days progress. The spirit board will warn these three that a demonic force is present in Salem.

Johnny will believe that either Allie or Chanel moved the board. But both of them will proclaim they did nothing of the sort. Johnny worked hard on the script and had to make a deal with his father, EJ DiMera (Dan Feuerriegel) in order to secure enough funding to get the movie made. He’s not going to back down from his dream based on a silly board game. But he would be wise to heed the ominous portends, because the devil is in Salem and already up to no good.

Ben Weston (Robert Scott Wilson) a former serial killer, has had doubts about having a baby with his wife Ciara Brady (Victoria Konefal). Ciara is looking at the situation with rose colored glasses, and has assured Ben that their baby will be fine. But when Marlena gave her approval as well, Ben was convinced to make a baby. Of course, Marlena was possessed at the time. If Johnny’s movie makes the devil even stronger, Ben and Ciara could have big trouble coming.

Will Johnny stop production? Will Chanel start having visions just like Celeste? And will the movie help the evil forces in Salem ensure their victory? Anything can happen in Salem, so stay tuned to Days of Our Lives, airing weekdays on NBC. And don’t forget to check back right here regularly for all your Days of Our Lives news, information and spoilers!