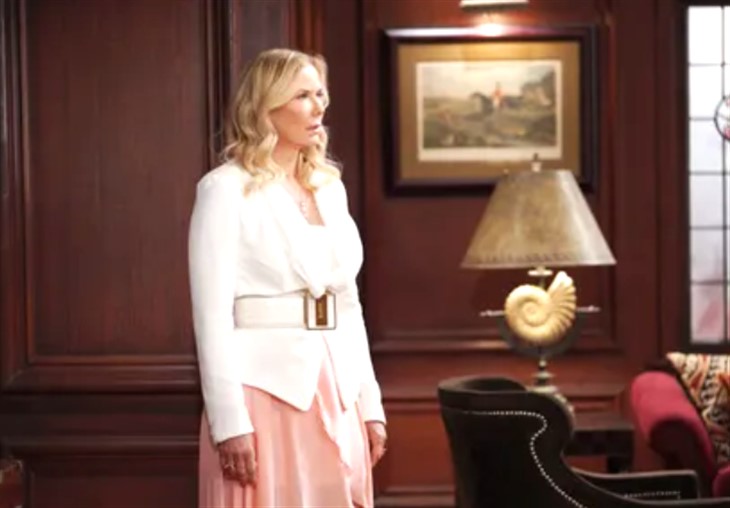 The Bold and the Beautiful (B&B) spoilers for Tuesday, October 26, 2021, reveal Brooke Forrester putting herself in someone else’s business because she really, really needs a storyline of her own.

The Bold And The Beautiful Spoilers – Is Donna Logan Ready To Go For It?

Brooke (Katherine Kelly Lang) is still absolutely horrified that Quinn Fuller (Rena Sofer) cheated on Eric Forrester (John McCook) with Carter Walton (Lawrence Saint-Victor). It doesn’t matter that she has cheated on every husband she has ever had and even had an affair with her sister’s husband and later married him. That kind of cheating is ok. And encouraging Donna Logan (Jennifer Gareis) to get Eric to cheat on Quinn is just fine. After all, Donna is her sister so she should have whoever and whatever she wants. It doesn’t matter if the person is already married.

Donna has already seen how she can lift Eric up with just a little honey for her Honey Bear, so might she decide to just go for it and make Eric hers once again? Obviously, his little problem was a Quinn problem, but does Donna bother telling Brooke that? If she does, Brooke would push even more for Donna to get Eric to leave Quinn.

Hope Spencer (Annika Noelle) and Thomas Finn (Tanner Novlan) were stunned to see Sheila (Kimberlin Brown) kissing Deacon Sharpe (Sean Kanan). What could both of them have been thinking to do something like that? And how long has that been going on? After all, Deacon just arrived back in town and Sheila has been there for quite a while now.

Even Deacon is a little confused by what Sheila is up to so she just flat out tells him and he’s shocked. What could Sheila’s ultimate endgame be? Yes, she just wants to be accepted and absolved of all of her sins, but her sins are many.

She thinks she doesn’t want to hurt anyone, but we all know Sheila may start out with the best of intentions but something always goes wrong because she is crazy and hurting people seems to be all she knows. Stay tuned to The Bold and the Beautiful weekdays to see how these stories play out.