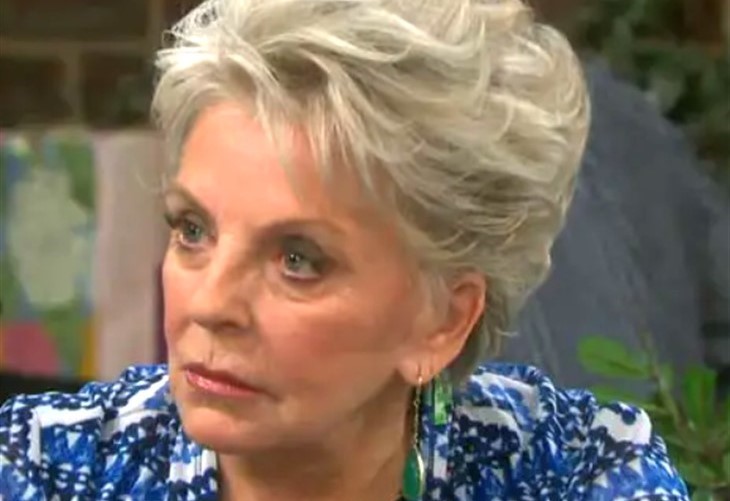 Days of Our Lives spoilers reveal a Salem Thanksgiving you’ll never forget as MarDevil continues to do her thing — and Julie Williams is ready to go to war with her.

If there’s one person who is just not having it with Marlena at this point, it’s Julie. She can’t believe she got Doug Williams (Bill Hayes) locked up in Bayview for so long and without visitors yet. That is so not like Marlena and Julie is not going to take it, which is why she got Marlena’s daughter, Belle Black Brady (Martha Madison) to sue Marlena (Deidre Hall) and get Doug out of there. And she finally brings him home for Thanksgiving, although things don’t go quite as planned.

“He will have been sprung. He will have literally been sprung by Julie. She will bring him home in a wheelchair,” Susan Seaforth Hayes said of Julie in an interview with Soap Hub, but added that it won’t all be sweetness and light. “He’s heavily sedated when Julie brings him home. He isn’t speaking. Julie has a moment of singing to him, and he doesn’t respond. She sings the Tom and Alice love song, ‘I’ll Be Loving You Always.’ I was fine to do it, unaccompanied and always singing flat. But I gave it a try.”

Of course, Julie still has no idea why Marlena wanted Doug locked up with no visitors for so long and couldn’t even imagine that she’s been possessed by the devil again.

“Well, like many Thanksgivings in the world, when the whole family gets together unexpected things happen. Sometimes good, sometimes not so good,” Seaforth Hayes said. “Have you ever been to a Thanksgiving dinner where everything went wrong? I would think the whole American humanity relates to, “Oh! It’s Thanksgiving. We’re all getting together. I’m a little bit worried about this.” That little caveat of, “Hmm. I don’t know. It will be great as long as everyone can keep their mouth shut.”

With MarDevil running around town causing evil and mischief everywhere, it’s only a matter of time before more people catch onto her and what’s going on. And with Doug out of Bayview and recovering, he might start talking soon and will have a whole lot to say. Stay tuned to Days of Our Lives weekdays to see how this story plays out.