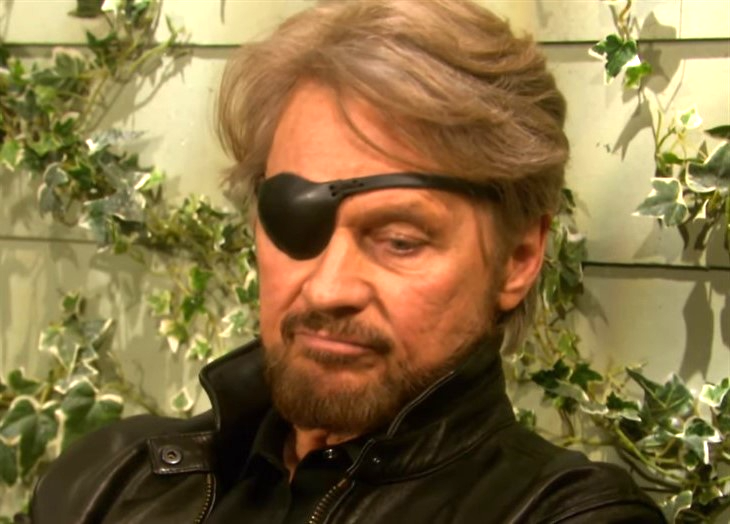 Days of Our Lives spoilers reveal that Steve “Patch” Johnson (Stephen Nichols) goes to search the DiMera crypt. Even though that is where John Black (Drake Hogestyn) is being held hostage, there is reason to believe he won’t be there when Steve opens the door. So, if John isn’t in the DiMera crypt, then where does he disappear to?

DOOL spoilers reveal that the devil can change appearance. This is exactly what Satan did when transforming into Kristen DiMera (Eileen Davidson). Once the devil became “Kristen,” the evil entity kept trying to corrupt John and Marlena’s love. It was their love that saved Marlena 27 years ago. So, the devil thinks that John’s betrayal will prevent Marlena from being saved for a second time.

In the weekly preview, John is no longer bound to a post. Instead, he is standing in front of “Kristen.” So, what is stopping John from running for the door? For one, Susan Banks (Stacy Haiduk) is still a hostage, too. Despite Susan irritating John, he won’t leave an innocent woman to die. The second reason is that he won’t go anywhere until he finds Marlena.

In order to keep the restraints off of him and to not get killed, John must do something to fool the devil. Since “Kristen” keeps trying to seduce John, he gives in and kisses her passionately. However, this is likely just a ruse in order to buy some time.

Days of Our Lives spoilers reveal that Steve is searching for John and doesn’t believe Marlena’s story. Steve questions Johnny DiMera (Carson Boatman), who gives him a clue. Johnny tells Steve about the strange night at the DiMera crypt on Halloween. Johnny says that the door was locked, which it usually isn’t. Suddenly, Marlena dressed as the devil came out of the crypt. Steve will realize that this could be a clue and gets a shovel to pry open the door of the crypt.

Days of Our Lives Spoilers – Searching For Marlena Evans

There is an indication that Steve might find the crypt empty. For one thing, Susan is hospitalized early in the week but John isn’t until the week of November 29. Instead, John will look for Marlena. Note that the official spoiler doesn’t say John and Steve, or Marlena’s loved ones search for her. It’s just John, which suggests that he is already free and looking for Marlena by the time Steve opens the door.

Now the question is will anyone believe Susan’s story if John isn’t there to back her up? Will John be able to find Marlena and what will happen with that phone call from Sami DiMera (Alison Sweeney)?