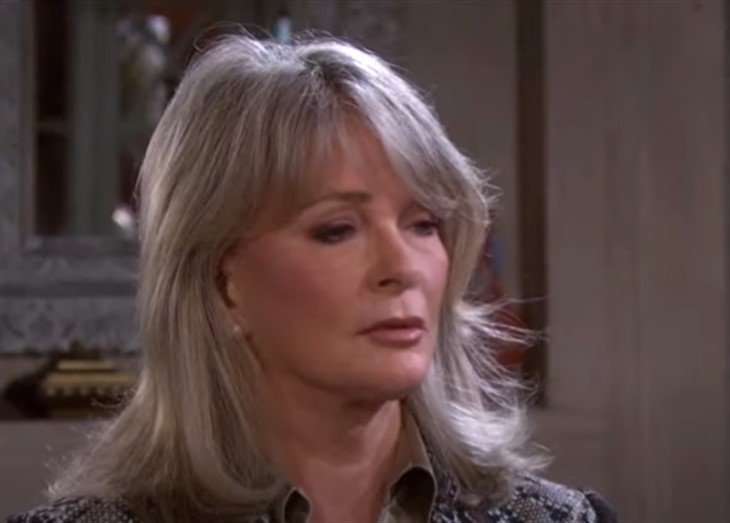 Days of Our Lives spoilers for the week of November 8 reveal that Brady Black (Eric Martsolf) is conflicted about Chloe Lane (Nadia Bjorlin). Brady turns to Marlena Evans (Deidre Hall) for advice. However, Marlena’s salacious advice and dirty mouth stuns Brady. Will he realize that Marlena is actually the devil or will he take that bad advice?

DOOL spoilers reveal that Chloe thought she solved her love triangle by taking Belle Brady’s (Martha Madison) advice. Even though Chloe and Brady have feelings for each other, Philip Kiriakis (Jay Kenneth Johnson) is the man that got the girl.

However, Philip is sabotaging his own relationship by exploding with jealousy at every turn. Chloe tried to solve this by moving out of the Kiriakis mansion. Chloe remains in a relationship with Philip, though.

Brady doesn’t know what to do about Chloe. It is clear that Brady wants to be in a relationship with Chloe. However, Chloe refuses to leave Philip and keeps giving him chance after chance. Frustrated over Chloe’s decisions and Philip’s rage, Brady turns to Marlena for advice, unaware that she is actually the devil.

Days Of Our Lives Spoilers – Dirty Mouth And Salacious Advice

Days of Our Lives spoilers reveal that during the week of November 8, Marlena will give Brady salacious advice. Brady will also be horrified to hear what comes out of Marlena’s mouth. It is teased to be quite dirty, but will Brady clue in that Marlena is literally not herself? Or will his desire for Chloe cloud his better judgment?

It is teased in Soap Opera Digest that Philip will end up exploding with rage. This will be far worse than what fans have already seen. So, it sounds like either the devil takes over Philip or convinces Brady to act on his feelings. In either situation, it will be bad for Chloe, Brady and Philip. Head writer Ron Carlivati explained,

What do you think Marlena advises Brady to do and will he take that advice? Just how far will Philip go when his jealousy is kicked up a few more notches? Will Chloe end up walking away from both Philip and Brady? We will have to keep watching the NBC soap to find out.

Be sure to catch up on everything happening with DOOL now. Come back often for Days of Our Lives spoilers, news and updates.