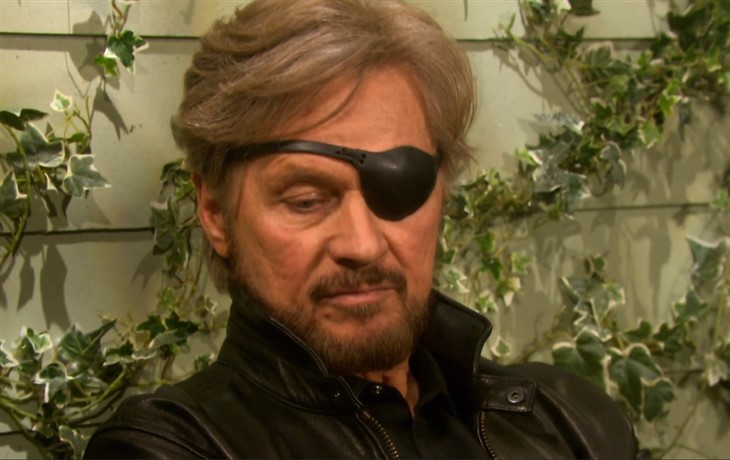 Days of Our Lives (DOOL) spoilers for the week of October 18 reveal that Steve “Patch” Johnson (Stephen Nichols) searches for Kristen DiMera (Stacy Haiduk). With Kristen a wanted woman, why is Steve looking for her? What happened that makes it urgent to find the villain? There are a few different possibilities, so let’s go through each of them.

DOOL spoilers reveal that before Kristen fled Salem, she promised to be back. Later, Kristen tried to schmooze her way back into Brady Black’s (Eric Martsolf) life during a phone call. Brady didn’t fall for it and pretty much told her to fly a kite.

It is teased that sometime this fall, Kristen will contact Brady once again asking to see their daughter. Despite Kristen being Rachel DiMera’s (Finley Rose Slater) mother, Brady doesn’t want his child to be influenced by the unstable Salemite.

When Steve goes searching for Kristen, there must be an important reason he’s been put on the case. Perhaps Rachel goes missing and if so, Kristen would be the most likely suspect.

When it comes to Brady, there is one person that Kristen blames for stealing him away. That individual is Chloe Lane (Nadia Bjorlin), who is currently in a relationship with Philip Kiriakis (Jay Kenneth Johnson). However, Chloe is fed up with Philip’s insane jealousy and cheating accusations. It is teased that Chloe will eventually trade Philip in for Brady.

When that happens, EJ DiMera (Dan Feuerriegel) will probably mention it to his sister. Kristen has made it clear that she’d rather die than have Chloe be a mother figure to Rachel.

Plus, Martsolf teased during a Zoom fan event that Kristen will be a major obstacle to Brady and Chloe having their happily ever after.

Days of Our Lives spoilers reveal that Sami DiMera (Alison Sweeney) was kidnapped by an unknown person. However, someone is sending text messages to Sami’s loved ones, so nobody knows she’s been taken against her will. There is a good chance that Kristen was responsible and impersonating people via text messages (and masks) is right up her alley.

Despite EJ being furious with Sami for cheating, he secretly still wants his wife back. If he finds out Sami was kidnapped and Kristen was behind it, that could kickstart a brand new DiMera family feud.

Of course, the main storyline right now is Marlena Evans (Deidre Hall) being repossessed by the devil. “MarDevil” will affect several people’s lives, so there is reason to believe Kristen might be integrated into the possession story.

What do you think brings Kristen DiMera back to Salem? Why is Steve Johnson looking for the villain? Let us know your theories and keep watching the NBC soap to find out what happens next.